Dolkar Tso’s blogpost was deleted shortly after it was posted but it was re-posted in full on the same day on Woeser’s blog and the screenshot below shows us what the posting looked like: 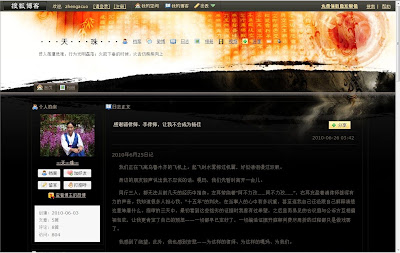 Dolkar Tso has written a few blogposts since the start of Karma Samdrup’s trial. Read the High Peaks Pure Earth translation of her account of the first day in court, titled “Praying”. Just two days later, on June 24, 2010, Karma Samdrup was sentenced to 15 years in prison. This article by TIME magazine gives an overview of the case and also refers to Dolkar Tso’s blogpost.

Dolkar Tso’s blogpost mentions Yang Jia, a young Chinese citizen who became frustrated with the law, launched an attack on a police station and stabbed six policemen to death in Shanghai on July 1, 2008. Executed for his crimes in November 2008, Yang Jia nevertheless became an internet hero and gained public sympathy for his stance against injustice, read an August 2008 Daily Telegraph article about him here. By mentioning his case in the title of her blogpost, it is clear that Dolkar Tso identifies with Yang Jia’s feelings of frustration with the Chinese legal system and gives credit and thanks to Karma Samdrup’s Chinese lawyers for not losing her mind.

Dolkar Tso also mentions the Uighur name “Abliz”, a person who was involved in the original 1998 case against Karma Samdrup involving alleged grave-robbing and who also testified against him.

We are on the plane leaving Urumqi. As the plane took off, misty rain swept the plane’s wing as though tears were overflowing from a pair of eyes.

A friend next to me quietly says what I can’t bear to say myself: Karma, we will leave you for a while.

The three colleagues all could not detach themselves from the experiences of the past few days. In my left ear hauntingly echoed the words “Abliz Abliz … “, my right ear could hear the lawyer’s eloquent powerful voice. I know that many people worry about me, “15 year sentence”, how heavy this weighs down on people’s hearts, even I myself have not clearly thought through what this means. On the third day of the trial, at first upon seeing the botched evidence I still had some hope, afterwards seeing how obviously the court and prosecution were protecting each other, my worse expectations were confirmed – everything had already been set up, the whole trial was made up of fabricated evidence and the entire process was a painstaking show.

I have felt despair, however I also find comfort – in such lawyers, in Karma, in us.

Last night on the return trip, lawyer Pu finally fell asleep, there was another case waiting for him straight after, another family waiting in despair for a genuine lawyer they can talk to and depend on. Sitting behind him, we can not help but shed tears, he and lawyer Li, working and rushing around day and night, lacked sleep from the start, especially the ailing lawyer Pu who in the night of the second day in court couldn’t rest and had to leave the courtroom to take an injection and medicine. How I hope they can rest, or hope even more that such good people no longer have to worry about these kinds of miserable stories. However, with more and more people facing difficulties, out of empathy I don’t want them to stop their work – such lawyers are too too few, the harder they work, the more innocent people will be comforted. In the same way that Karma endured physical and spiritual ravages, the hard work of lawyers is also harsh physical punishment imposed on them by society. In the same way that Karma does not yield, the lawyers will also not give up.

Thank you  these two words are too weak to express my gratitude to the two lawyers. I dont know how to express my gratitude adequately. I’m unable to imagine what situation I would be facing if not even the lawyers had followed the law, but succumbed to the temptation of money and confused common notions of right and wrong. How deep would my despair run in that case? That would be the kind of bottomless despair that would force those of us who believe in Buddhism to bear deep hatred. Nobody wishes to hate others, and Yang Jia didnt want to become Yang Jia. My heart doesnt wish evil on others, and would fear turning into Yang Jias abysmal, hopeless and lonely state of mind. Therefore, I can only once again use these weak words of gratitude to salute these two lawyers!

You have not only preserved our faith in law and justice, but made me even more convinced: when the choice is between right and wrong, there is no ethnic difference. We are striving for truth and justice together, no matter  if we are Han or Tibetan. I appreciate the treasures and common life of our nationalities. Diversity provides us with experience and self-awareness. The common pursuit of goodness and beauty provide us with real unity and harmony.

I believe that even though we have seen this trial  a trial that benumbed my limbs and made tears well up in my eyes -, Im still not Yang Jia. I thank these two lawyers, I thank all friends of all nationalities, and from the beginning to the end, I have not felt alone.