High Peaks Pure Earth has translated a selection of censored Weibo posts by Tibetan language rights advocate Tashi Wangchuk. Tashi Wangchuk was released on January 28, 2021, after completing a five year prison term for “inciting separatism”. Upon release, there was little news about his wellbeing or activities until October 2021 when his lawyer Liang Xiaojun posted photos on his Twitter feed.

Some of the first photos of Tibetan language rights activist Tashi Wangchuk since his release from prison. Disseminated by his lawyer. https://t.co/vkMd9rzSpd

Tashi Wangchuk opened his own Weibo account in September 2021 and was actively posting text and photos until his Weibo was shut down on April 10, 2022.

Prior to his Weibo account being disabled, High Peaks Pure Earth was able to archive several posts and translate them. The posts below are a selection from January 2022 to illustrate Tashi Wangchuk’s continued advocacy work for the Tibetan language in the face of monitoring and surveillance. Thanks to reports from Radio Free Asia and the Tibetan Centre for Human Rights and Democracy, we know that Tashi Wangchuk also went on to tour Tibetan schools in Golog, Rebgong and Malho until he struggled to find hotels who would allow him to stay overnight.

With the disabling of his Weibo account it’s not possible to know of Tashi Wangchuk’s current whereabouts or wellbeing. Radio Free Asia last reported on April 15, 2022, that Tashi Wangchuk was staying at his brother’s house in Xining. 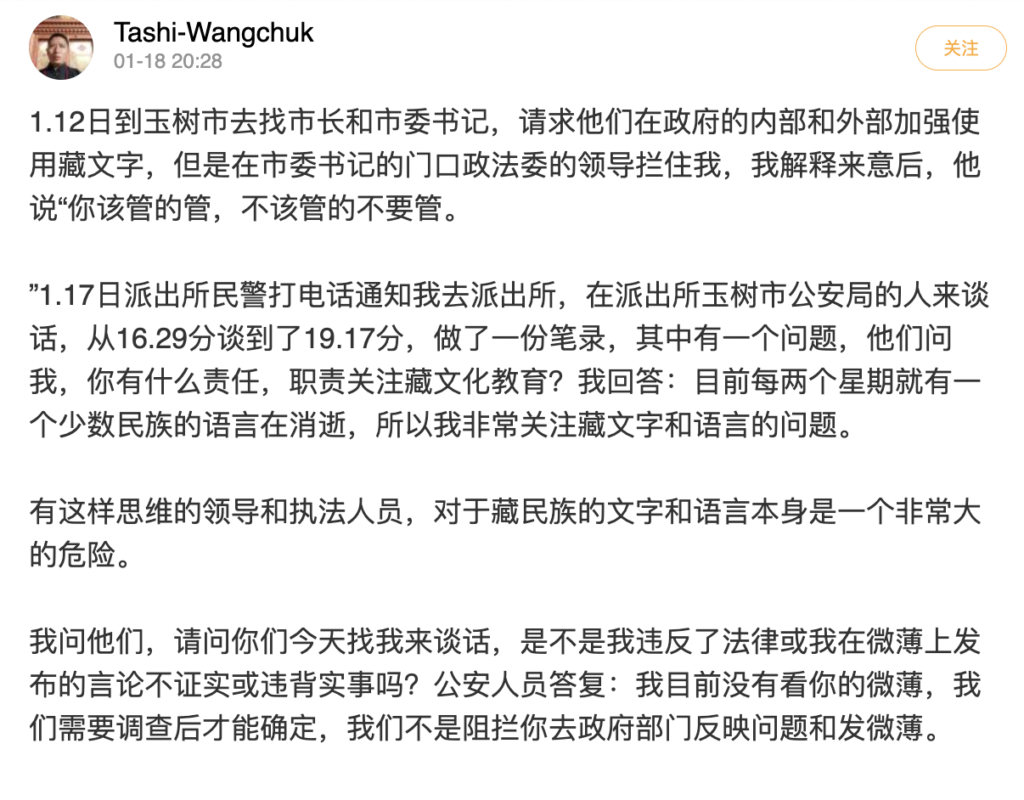 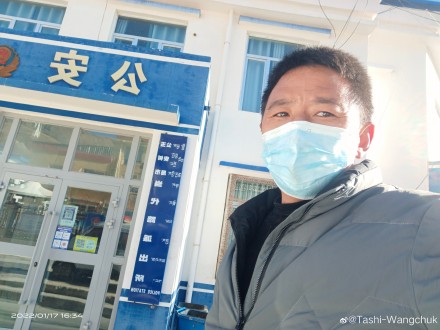 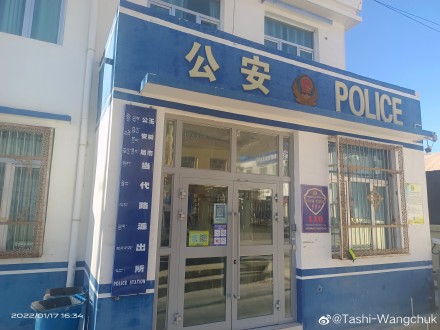 On January 12, I went to Yulshul to find the Mayor and the Party Secretary to ask them to strengthen the use of Tibetan inside and outside the government. But I was stopped by an official of the Political Affairs Commission. When I explained my purpose, he said: “just mind your own business, don’t get involved in things that don’t concern you.” On January 17, I received a call from the police asking me to come over to have a talk with someone from Yulshul Public Security Bureau. We talked from 16:29 until 19.17 and I took some notes. One question they asked me was: What qualifies you to become concerned about Tibetan culture and education? I answered: Nowadays, every two weeks, a minority language disappears. These kinds of officials and law enforcers are putting the Tibetan language in danger. I asked them: please tell me, are we having this conversation because I violated the law or because I posted fake news or factually wrong information on Weibo?

The Public Security Officer replied: I haven’t looked at your Weibo page yet, we have to investigate before we can come to a conclusion. We do not stop you from going to the government or from posting on Weibo.

In my opinion, the behaviour and actions of the Yulshul Political Affairs Commission and Security Bureau as well as the above questions are a way of using their power to stop people from using their right to report problems to the authorities. This is officials protecting each other. They are destroying the Tibetan language and script. I demand that law enforcement groups and civil servants in Tibetan areas increase their awareness of the constitution and the national regional autonomy law. 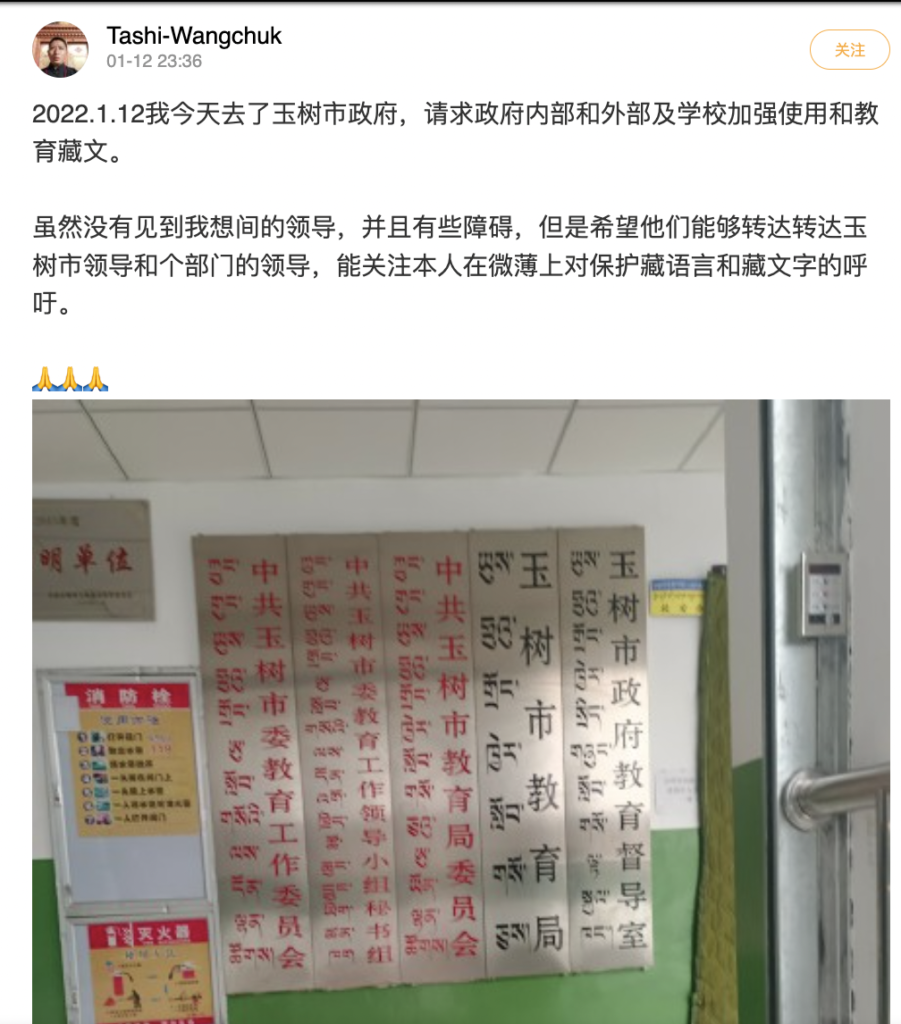 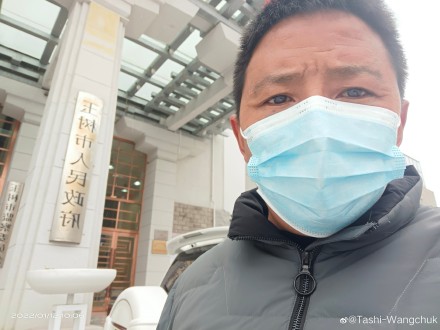 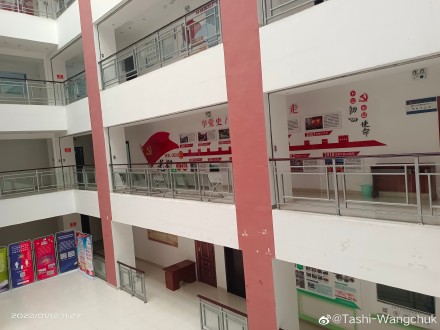 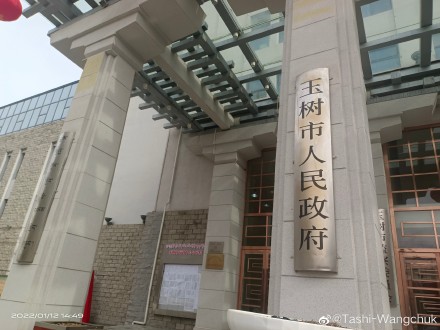 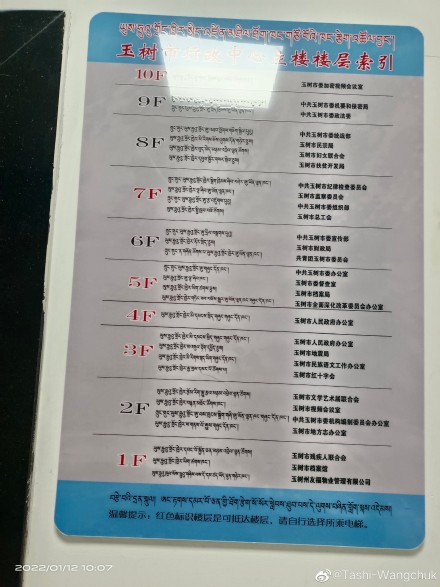 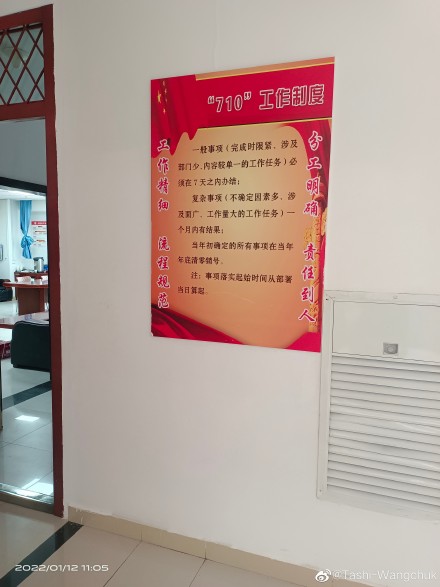 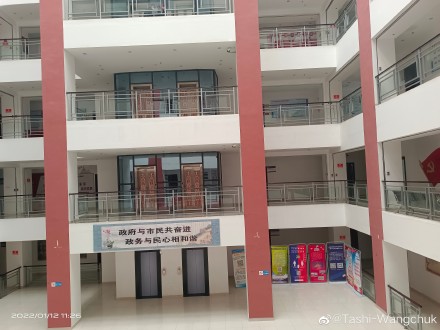 2022.1.12 Today, I went to the Yulshul City Government to ask them to increase Tibetan language education. Even though I did not manage to meet the official I wanted and even though there were some problems, I still hope that Yulshul officials will still look at my Weibo and my calls to protect Tibetan language and script. 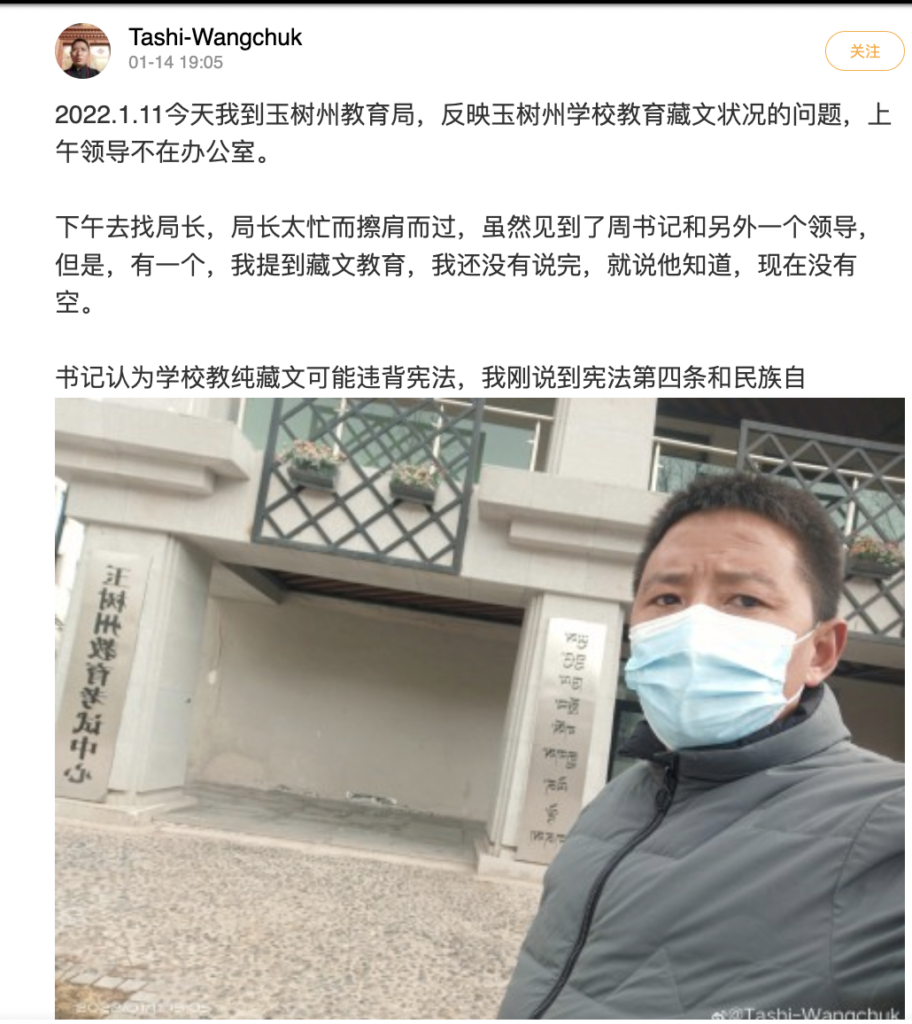 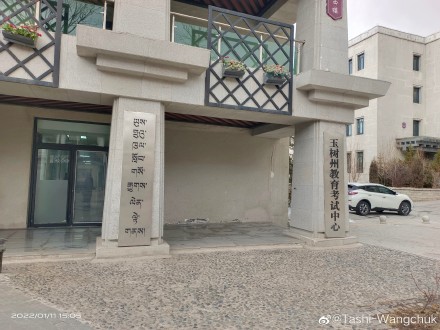 On January 11, I went to the Yulshul Education Bureau to give my opinions on the situation of Tibetan language education. In the morning, the person in charge was not in the office. In the afternoon, I went to see the Bureau Chief but he was too busy and just ran past me. Even though I did meet Secretary Zhou and another leader who, as soon as I mentioned Tibetan education and before I had even finished, said that he did not have time. The secretary in contrast believed that pure Tibetan education would be against the Chinese constitution. I had just mentioned Article 4 of the constitution. He asked rhetorically: the constitution or the regional autonomy law, which one is more important? The constitution demands education to be in Mandarin. Well, all I can advise him is to go back and study law. Then I asked why places like Amdo and Kanlho had full Tibetan education (including maths, humanities and sciences) and why Yulshul did not? His answer was: These places are currently attentively studying the Yulshul education model.

I hope that all of you can dedicate a bit of time to protecting the Tibetan language. I think that if Amdo and other regions cancel their Tibetan education and follow the Yulshul model, the future of Tibetan language and script will look very grim and Tibetan may soon disappear. This is because worldwide, one language disappears every two weeks. And along with it goes a cultural history and intellectual heritage. What we may do is to investigate the Tibetan proficiency of university graduates in Yulshul.

Li Dazhao said: “Freedom of thought and freedom of speech are both designed to ensure that life is in the realm of light and truth. Thought is absolute freedom and cannot be prohibited.”

How do we protect Tibetan language and script?

A question that we need to ask is: do local governments of the TAR when they recruit new civil servants use Tibetan language test sheets? Do Government departments, banks, mobile phone providers and others use Tibetan in their internal and external documents, contracts, files etc.? When dealing with administrative issues, do Tibetans speak Tibetan? Are there schools in the TAR where the only language of instruction is Tibetan (including for maths, humanities, sciences)?

Education and whether there are relevant Tibetan subjects offered at Minzu Universities that contemporary society needs is, in my opinion, essential for Tibetan language and script. Because if civil servants in the TAR do not use Tibetan when they recruit new people, then universities are forced to drop Tibetan language education and put all their efforts into Mandarin. Nowadays, a common understanding is that going to university is to take the civil servant exam. We know that many Tibetan students do not study Tibetan once they enter university. Many of them have completely forgotten Tibetan grammar.

We know that within government departments and public institutions in the TAR, some younger Tibetan officials but also some who are 40 or 50 years old, do not speak Tibetan, let alone read it. This is a key reason for the weakening of the Tibetan language. We also know that in a place like Yulshul where universities only offer separate Tibetan language classes (maths, humanities and sciences are taught in Mandarin), the curriculum does nothing to protect Tibetan language and script. Plus, some Tibetan students are allocated into English language classes, so they don’t learn Tibetan at all. This has accelerated the disappearance of Tibetan and it will be even more serious after a decade or so.

According to Article 4 of the Chinese constitution, “all ethnic groups shall have the freedom to use and develop their own spoken and written languages.” According to Article 121, “in performing their duties, autonomous organs of ethnic autonomous areas shall, in accordance with the autonomous regulations of that ethnic autonomous area, use the spoken and written language or languages commonly used in that area.” And according to Articles 10 and 21, respectively of the regional autonomy law, “the organs of the autonomous government of national autonomous regions shall, in accordance with the regulations on the exercise of autonomy of the area, use one or several languages commonly used in the locality; where several commonly used languages are used for the performance of such functions, the language of the ethnic group exercising regional autonomy may be used as the main language.” Only by following my above suggestions would the local governments actually govern in accordance with the national regional autonomy law. 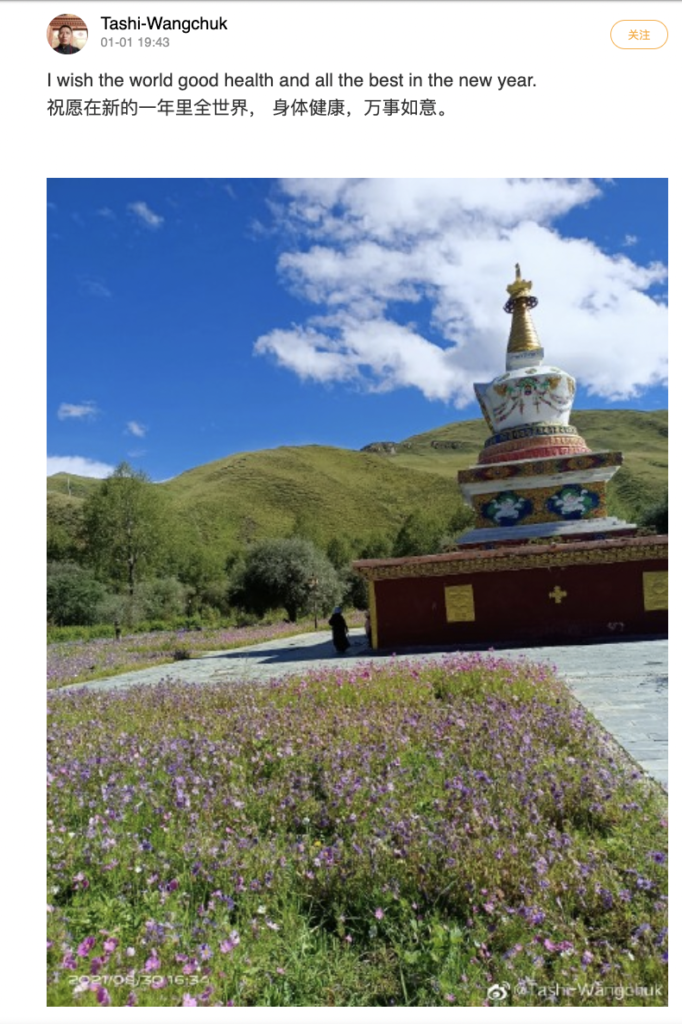 China's Covid policies are particularly harsh in places like Tibet and Xinjiang. Lhasa, for example, is enduring the longest Covid lockdown since Shanghai’s. Inhumane restrictions are said to be behind a spate of suicides. w/@Lindadalew https://www.bloomberg.com/news/articles/2022-09-30/xi-s-covid-zero-policy-takes-toll-in-lhasa-s-long-lockdown via @BBGEquality

CMP's David Bandurski writes about a so-far unremarked change in official translations for "Tibet" at the Global Times and Ministry of Foreign Affairs. Is this a trial for changes at other state media down the line? https://chinamediaproject.org/2022/09/29/tibet-by-any-other-name/

We Measure the Earth with Our Bodies by @tseringylama is on the 2022 Scotiabank Giller Prize shortlist! It was published by @McClellandBooks. Congratulations!