High Peaks Pure Earth presents biographical information about the late popular Tibetan singer Tsewang Norbu and translations of two of his songs . The songs are 2018’s “Tsampa” and 2020’s “Returning Home”. *Please scroll down to see the music videos*

It has now been widely reported that Tsewang Norbu carried out a self-immolation protest in Lhasa by the Drakgo Kaling stupa in front of the Potala Palace on February 25, 2022, and perhaps a week later passed away from his injuries. He was 25 years old.

Below is Tsewang Norbu’s bio page on Baidu Baike, an online encyclopedia similar to Wikipedia. Thank you to Palden Gyal for the English translation. 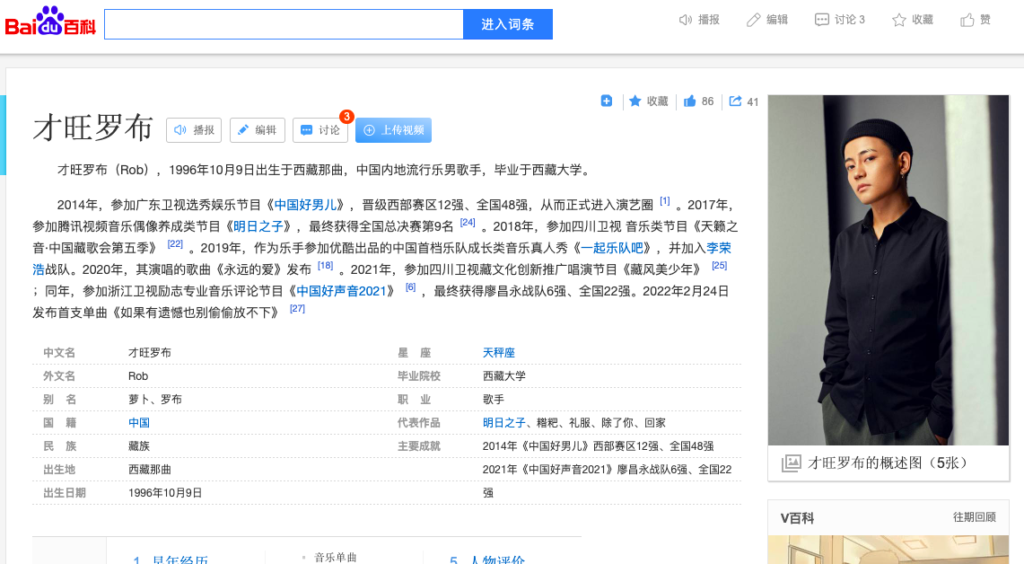 Biographical and Career Information for Tsewang Norbu on Baidu Baike:

Tsewang Norbu (English name: Rob) was born on October 9, 1996 in Nagchu (ནག་ཆུ།), Tibet Autonomous Region. He grew up in Nagchu where he received his primary school education. Watching his father compose and create music, Norbu was exposed to music and arts from an early age. Under such influences, he fell in love with music and developed a rare kind of dedication to it. Not only does Norbu sing modern, folk, popular, traditional and many other types of songs, but he also writes and composes them. Afterwards, Tsewang Norbu attended Tibet University in Lhasa.

In 2014, Norbu participated in the Guangdong TV’s talent show Road To Star (中国好男儿) in which he advanced to the top 12 candidates in the Western Division and top 48 in the country. This appearance marked his entry in popular performing arts shows. Later, Norbu chose to withdraw from competition in the Road to Star show. Simultaneously, he also declined the invitation of The Voice of China (中国好声音).

In 2017, Tsewang Norbu participated in the music icon show The Coming One (明日之子), organized by Tencent Video. His live performance of the folk song “Nomad’s Ballad” earned him the “Super Lucky 666” offered by the judge Hua Chenyu and advanced to the top 12 finalists. Later, through many stages of competition, he advanced to the top 4 of the Shengshi Magic rank and top 9 in the national finals. He was finally eliminated in the first competition of the 9 finalists and won the ninth place in the national finals. At the same time, he participated and recorded the theme song “The Coming One” for the homonymous talent show program.

In 2019, on January 13, Tsewang Norbu released his solo “Samsara” (འཁོར་བ།) and on March 5, he released “Let’s Break Up” online. On March 11, the song “DISCO” with A Rui and Luo Huan was released. Again on March 12, he released his “Looking Toward the Changthang” (བྱང་ཐང་བལྟ་བའི་མིག). On May 18, Tsewang Norbu attended the Beauty Valley music concert and performed “Dance Floor.” On July 25, the song “Except You” (རང་མ་གཏོགས།), sung with Ariwa Chemi Lhamo, was released. This was Tsewang Norbu’s first love song duet single, and the style combines modern pop R&B and Tibetan RAP. In the same year, as a musician, he participated in China’s first band growth music reality show “Let’s Band Together” produced by Youku, and joined the Li Ronghao team. At the end, after three performances, the team failed to get to the fourth round and were eliminated. On September 4, he released his personal single “Dance Floor,” and on December 31, he performed and released “Young” (ལང་ཚོའི་དཔལ།).

In 2021, Tsewang Norbu participated in the CCTV-3 variety show “Spring Festival Gala” (春晚) and performed the song “Under the Cloud” (飞云之下) with Li Ziting. This was his first appearance on the stage of CCTV. On June 11, as an honored guest, Tsewang Norbu attended the awards ceremony of the 24th Shanghai International Film Festival and performed his song “Returning Home” (ཡུལ་ལ་ལོག). In the same year, he also participated in Sichuan TV’s Tibetan cultural program “Handsome Tibetan Youth” (藏风美少年). Afterwards, Tsewang joined the Zhejiang TV’s talent show “The Voice of China” (中国好声音), a music review program that promotes professional development of musicians, and won the Top 6 in Liao Changyong’s team and Top 22 in the national finals.

In 2020, Tsewang Norbu sang his charity single “Forever Love” to pay tribute to frontline workers who are fighting the pandemic all over the world. Tsewang not only has a gentle and clear voice, but also has a steady voice and solid guitar playing skills. His singing skills came to prominence in the soundtrack of “The Coming One.” It features Tsewang’s natural Tibetan singing style and demonstrates both his creative capability and virtuosity with musical instruments; the song’s comprehensive strength may put the soundtrack as one of his number one records. When Tsewang Norbu sang the song “Sorry Seems to Be the Hardest Word,” for his exquisite and superbly emotional performance, even Hua Chenyu remarked that “no fault can be found,” and in praise of Tsewang’s stellar performance he said that he is “completely infected by this song.” (China.com, Tencent, and NetEase Review).

There has been no official response by authorities or in state media about Tsewang Norbu’s passing. His Weibo page where he has almost 600,000 followers is still accessible online but has been disabled. His last Weibo post, written on the day of his self-immolation, was expressing gratitude to his fans for their comments and messages about his most recent song. On March 12, 2022, Woeser posted on Twitter that a line (因违反相关法律法规，该用户目前处于禁言状态)  had been added to Tsewang Norbu’s Weibo page saying that “The user is currently banned for violating relevant laws and regulations”.

As mentioned in the Baidu Baike bio, Tsewang Norbu was influenced by his composer father Choegyen to pursue music. Choegyen taught at the Nagchu City Performance Arts Troupe. His mother, Sonam Wangmo, is also a prominent singer whose rendition of “Laundry Song” was featured on High Peaks Pure Earth in 2011. Sonam Wangmo sings with the Song and Dance Troupe of the General Political Department of the PLA. Both parents therefore are deeply ingrained in the official apparatus of cultural organs belonging to the CCP. However, Tsewang Norbu’s maternal Uncle Lodoe Gyatso is one of the longest serving political prisoners in Tibet. Having already served a 21 year sentence, Lodoe Gyatso staged a political protest in front of the Potala Palace in 2018 for which he was sentenced to 18 years while his wife Gakyi was also sentenced to two years for helping to film the protest. Tsewang Norbu’s self-immolation also came at a particularly sensitive time in Lhasa with the “Two Sessions” taking place in Beijing and Losar (Tibetan New Year which fell on March 4) and the anniversaries of March 10, 1959, and March 14, 2008, also around the corner.

Tsewang Norbu was a popular contemporary singer both inside and outside Tibet and sung in Tibetan, Chinese and English. His music videos on YouTube currently have many comments conveying mourning and condolence. Translator Palden Gyal has noted that even on massive national TV platforms such as the “Voice of China”, Tsewang Norbu tweaked his song lyrics while singing “Returning Home” to replace the word “Nagchu” with “homeland Tibet”. Below is a music video and translation of the lyrics to “Returning Home”, thank you to Bhuchung D. Sonam for the translation. Please note the music video does not seem to be an official one and was lifted from YouTube.

The second song translation is “Tsampa”. We’ve written extensively in the past about the deeper meaning behind tsampa in terms of Tibetan identity and the popularity of tsampa in songs.

Below is the music video and translation of the lyrics to “Tsampa”, thank you to Bhuchung D. Sonam for the translation.