High Peaks Pure Earth has updated this post from January 19, 2011 to include some more interesting food-related trivia and new photos. We are keeping the original post up on the previous URL here. Since publishing this post as part of GOOD’s “Food for Thinkers” week-long online blog festival, we have received great feedback and information. We have also read with great interest the long article by Jamyang Norbu all about tsampa and look forward to the rest of his series “In Defence of Tibetan Cooking”.

Below is the updated version of “Tsampa Eaters and Sweet Tea Drinkers: Tibetan Identity Assertion Through Food” 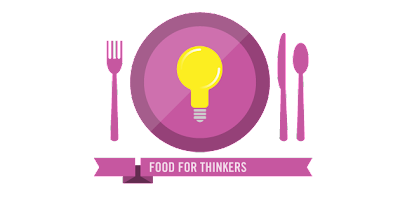 High Peaks Pure Earth is thrilled to be taking part in GOOD’s Food for Thinkers – a week-long, distributed, online conversation looking at food writing from as wide and unusual a variety of perspectives as possible taking place between January 18 and January 23, 2011.

Tibet may not exactly be renowned as a home for exotic cuisine but food makes an interesting lens through which to examine Tibetan identity, particularly after the protests of 2008 and the subsequent political and military crackdown. This High Peaks Pure Earth contribution to GOOD’s online festival hopes to provoke discussion about food in terms of identity and resistance.

Here at High Peaks Pure Earth we love good writing, good ideas and good food and readers are encouraged to check out the conversation in full at GOOD.is/food, leave comments and follow the Twitter hashtag #foodforthinkers. 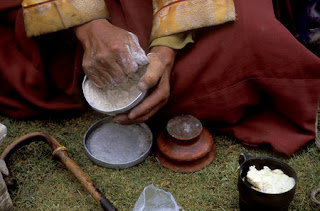 Tibetans’ staple food is tsampa (རྩམ་པ་ rtsam pa), roasted barley flour. It is highly suited to the altitude and harsh climate of the plateau, requires few utensils and is an extremely versatile staple that can be consumed in various ways. The most common way to eat tsampa is to mix it in a bowl with butter and tea and then to hand roll into small balls and then eat.
Tsampa is unique to Tibet and at the core of Tibetan identity. Tsampa represents “Tibetan-ness” in face of threat, as explained by historian Tsering Shakya in his essay “Whither the Tsampa Eaters”. In the essay, Shakya refers to a letter published in 1959 by The Tibetan Mirror – a Tibetan newspaper printed in Kalimpong (India) – at the height of Tibetan resistance to the Chinese invasion that was “symbolically addressed to ‘all tsampa eaters'”. As Shakya points out, “The use of tsampa transcended dialect, sect, gender and regionalism.”
The continuity of Tibetan resistance can also be traced through the persistence of the idea of tsampa as a uniting factor in identity, so, for example, in March 2008 when Tibet rose up in protest against Chinese rule, protesters in Lhasa were calling out to ‘tsampa eaters’ to join them and the following year in eastern Tibet, protesting monks cried out “Rise up, all tsampa-eating Tibetans.”

Below is a YouTube video made by the Tibetan Deaf Association. The video demonstrates the Tibetan sign language for China, Tibet and Lhasa. The sign for Tibet is the action of preparing tsampa for eating! The sign for Lhasa is the same action followed by folding two hands in prayer.

Today, despite the widened variety of food available in Tibet compared to sixty years ago, tsampa is enjoying something of a cultural revival. Whereas several years ago, tsampa was seen to be something eaten only by the elder generation with the younger set in urban areas embracing Chinese style hotpot or spicy dishes from Sichuan province, since the protests and crackdown of 2008 there has been a cultural re-assertion of Tibetan identity taking place. This reinforcing of Tibetan identity is taking place both on and offline and tsampa is back with a vengeance.
In 2010, Tibetan singer Tashi Dhondup was sentenced to 15 months in a labour camp for his album “Torture Without Trace“, a collection of songs about the suffering of Tibetan people under Chinese rule with many references to revering and missing the Dalai Lama. The second track of the album is titled “Western Land of Scholars” which is a direct reference to India (more India connections below in “Sweet Tea”). In Tibetan literature, India is referred to as a land of scholars, paying tribute to the great scholars of Buddhism. In the song, Tashi Dhondup sings, “Remembering my brother in exile / I carry a bag of tsampa on my back / And take this road to / The western land of scholars.”
Aside from the political connotations and identity assertion, Tibetans are also appreciating the wholesome and nourishing health properties of tsampa following numerous food scandals in China such as 2008’s poisonous dumplings and melamine tainted milk powder.
In 2008, it was revealed on Tibetan writer Woeser’s blog that stores of tsampa also made a good hiding place for stashing away photos of the Dalai Lama when the military police carried out their raids.
Following the devastating earthquake in Tibet in April 2010, Chinese state media reported on a tsampa donation fervour: “Residents in Lhasa […] have donated so much tsamba to the quake-stricken Yushu […] over the past weeks that many stores selling the Tibetan staple food have run out of it.”
The ways in which tsampa can be consumed have evolved considerably: today it is possible, at least in Lhasa, to buy tsampa cookies from the supermarket (photo below), complete with glossy packaging: 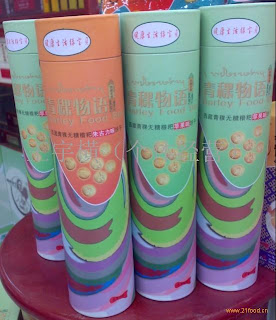 (Thank you to Bhuchung D. Sonam of TibetWrites for the translation of the Tashi Dhondup lyrics.)

Even though Tibetans traditionally drink their tea with butter and salt, sweet tea has become a popular drink especially in Lhasa, representing an entire social phenomenon as well as a firm political statement. Sweet tea is an Indian style of drinking tea with plenty of milk and sugar and explicitly links Tibet with India. Sweet tea was introduced to Lhasa by Tibetan Muslims during the 1930s, sweet tea being popular with Muslims because of prohibition against alcohol. Also, the tea houses often had radios where they could listen to the news in Urdu. The Sweet Tea House became a sign of modernity and a link to the outside world as sugar was very much a luxury item imported from India. Those who drank sweet tea were seen as people who had travelled and were cosmopolitan, signifying too that India was the source of modern items and ideas.
After the reform period, the “Sweet Tea House” took on a new meaning in Tibetan in the 1980s. Many sweet tea houses emerged in Lhasa, where young artists, teachers and intellectuals would meet to chat and gossip about the news. The tea houses had a unique system of payment, the owner did not directly sell the tea to the customer but sold it by the kettle or flask to the server, usually young boys and girls from the countryside, who would sell the tea to the customer.
According to art historian Clare Harris in her essay “The Buddha Goes Global” on Tibetan artist, and one of the founders of the ‘Sweet Tea House Association’, Gonkar Gyatso,

“In this atmosphere Gyatso and some of his artist friends, felt at liberty to establish the “Sweet Tea House Art Association” and began to exhibit their works in the tea houses of the Shol district of Lhasa, where students from Lhasa University and other young Tibetans would congregate. The ‘Sweet Tea’ artists were participants in heated discussions about the future of Tibetan culture and their paintings acted as catalysts in the debate about modernity and Sinicization. Their stated aim was to produce a new type of art which was both specifically Tibetan (rather than Chinese) and explicitly anti-traditionalist in form.”

Years later, when Gonkar Gyatso moved to the UK, he opened a small gallery in East London and called it “The Sweet Tea House“.
More recently, here at High Peaks Pure Earth we have written about how cyberspace has afforded Tibetans new ways to exchange and communicate in a “Virtual Sweet Tea House”.
Another cyber use of Sweet Tea is by a popular social networking site used by Tibetans called MyBudala. The screenshot below shows how the feed for status updates is called “Sweet Tea” and the feed for notes is called “Tsampa”! 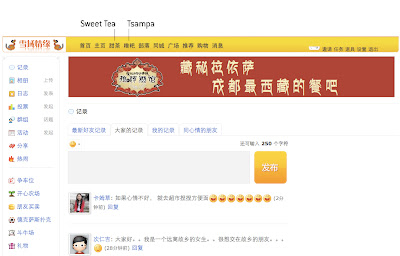 The example of sweet tea, as well as tsampa, shows how closely Tibetan identity assertion is connected to certain food. This tweet (below) from July 2010 by a young Tibetan demonstrates the role played by sweet tea houses in reinforcing Tibetan identity: 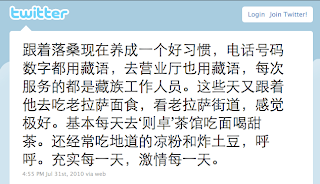 Since Losar (Tibetan New Year) I have developed a good habit, using Tibetan language to say phone numbers, using Tibetan language in the work place where all the staff are Tibetan. Recently, in line with this development I went to eat traditional Lhasa thugpa (noodles), seeing the streets of old Lhasa was a great feeling. Every day I go to “Zezhuo” tea house to eat thugpa and drink sweet tea. I also often eat lephing (Tibetan street snack) and fried potatoes, hehe […]

At the same time as writing this article, High Peaks Pure Earth noticed a feature on “How To Make Tibetan Sweet Tea” by China Tibet Online, also published today, such a coincidence! 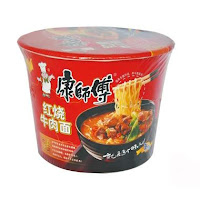 Since the heightened sense of Tibetan identity following 2008, there has been a refusal to use loan words and to conscientiously use Tibetan terms when speaking Tibetan. In October 2010, protests to save Tibetan language in schools took place all over eastern Tibet and Tenzin Dorjee, Executive Director of Students for a Free Tibet, recounts on his personal blog “Yarlung Raging” that Tibetan monks in Zachukha are fining each other 1 Yuan for every Chinese word they use. Tenzin Dorjee says of this small act of resistance, “It appears that this new self-imposed rule is spreading through other parts of Tibet. It’s hard to imagine a better way to preserve our language.”
The connection to food here is in a short anecdote that we at High Peaks Pure Earth heard recently from Eastern Tibet, post-2008, about Tibetans going into a road-side restaurant and asking for fangbian mian (方便面, Chinese word for instant noodles). The restaurant owners refused to serve anyone who used Chinese words for the food. However, if you ask for thabde thugpa (སྟབས་བདེ་ཐུག་པ་  Tibetan word for instant noodles), you were served straight away…

CLAIMING OWNERSHIP
Following the protests in Tibet in 2008, an elderly street vendor in Lhasa found his wares regaining popularity. This particular street vendor sells ‘trenpo’ (སྲན་ཕོས་ sran phos) – a traditional Tibetan snack made from Tibetan black beans. Trenpo was quite a popular snack before the 1990s in Lhasa but its popularity declined when Chinese snacks came to occupy the market. 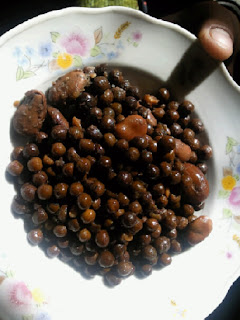 The black beans for trenpo are first boiled in yak bone soup for hours, making it soft and appetising. The only other ingredient put in the soup is salt. There are two types of trenpo, one you can eat with added chilli and the other without chilli. Sold by the soup-spoon full by the street vendor for 1 Yuan ($ 0.15) per spoon, hungry buyers used to take their own bowls to eat straight out of, nowadays the beans are more likely to be consumed out of plastic bags. 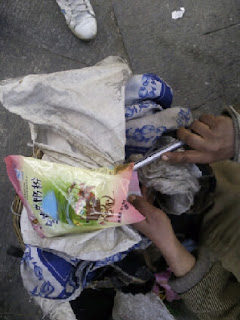 This particular street vendor in Lhasa would stand on the street and quietly mumble under his breath that Tibetans should “claim ownership” of their own food, their traditional snacks. His snacks would sell out very quickly every day!
Support our translation work:
http://bit.ly/DonateHPeaks

A BRILLIANT REVIEW OF A POWERFUL BOOK "Chilling as the human stories told in CONFLICTING MEMORIES are, they are the product of an era of “liberalization” that is now over...In China's present “New Era,” there is no place for conflicting memories" https://www.cambridge.org/core/journals/journal-of-asian-studies/article/abs/conflicting-memories-tibetan-history-under-mao-retold-edited-by-robert-barnett-benno-weiner-and-francoise-robin-leiden-brill-2020-681-pp-isbn-9789004433199-cloth/D626B27F40A283DA4BF08FF96BBAFE68#.YvP1cFF6dMQ.twitter