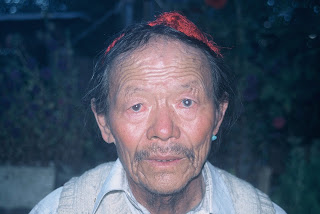 A day ahead of President Sarkozys meeting with the Dalai Lama in Gdansk, Human Rights Watch sent out a press release focusing on the detention and recent sentencing of 81 year old Lhasa native, Paljor Norbu (Dpal byor nor bu, private photo above), a printer by profession, to 7 years in prison for allegedly printing “prohibited material”. Also mentioned in the press release were two cases that will be known to regular High Peaks Pure Earth readers, Jamyang Kyis good friend Norzin Wangmo and Labrang monk Jigme who still hasnt been heard from since he was arrested just over a month ago.

Paljor Norbu ran a traditional Tibetan printing house, using woodblocks to print lungta (rlung ta) and religious texts known as (chos sku’i ring bsrel) which are sacred writings used for the consecration (rab gnas) of religious artworks. The picture below from Paljor Norbu’s printing house shows rolls of text that are lodged inside newly consecrated religious statues. Human Rights Watch calls Paljor Norbu a prominent Tibetan cultural figure. He had been involved in printing since the age of 11 when he started an apprenticeship with his Uncle. No stranger to political climate changes, he had been imprisoned after the 1959 uprising as he was already considered a rebellious person for having been a printer under the direct employment of the Tibetan government (through the Guild at the time). 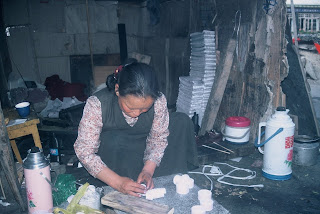 Before 1959, apart from his regular work, he also went to Drepung Gomang to print texts from wooden blocks stored there, as well as Tashilhunpo and Narthang Monasteries. In Narthang, he supervised the printing of one set of the 224-volumes of the famous Narthang Tengyur (Snar thang Bstan gyur), an order from the Fifth Jamyang Shepa (1916-1947), the famous head of Labrang Monastery and book collector. It took him ten trips from Lhasa to Narthang to supervise the process.

Those who know him describe Paljor Norbu as a very modest, quiet person and he is widely considered as an elder by other printers in Lhasa, and is therefore widely respected. The Human Rights Watch press release mentions that his family-run printing press has been closed down since his detention.