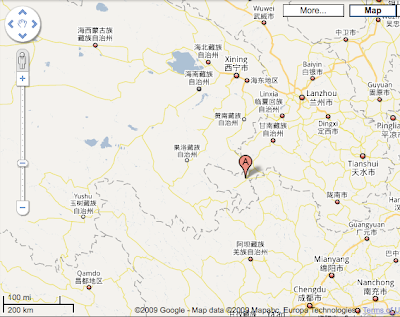 Screenshot taken from Google Maps, A marks the county of Machu.
The nearest big towns are Lanzhou in Gansu Province and Xining in Qinghai Province.

The blogpost represents another example of citizen journalism in Amdo and official state media has only reported on the floods in Chinese and not Tibetan (or English). For dramatic photos and an official news report in Chinese see http://news.sina.com.cn/c/2009-07-22/084318272323.shtml. 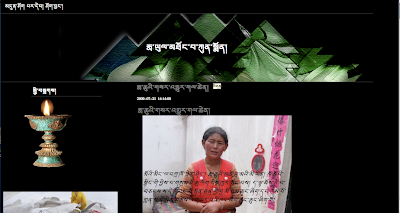 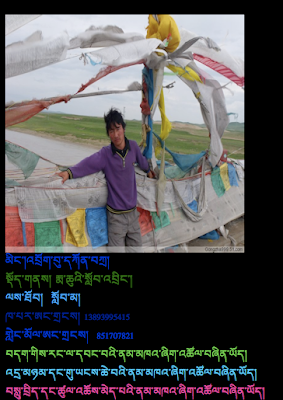 The motto on his blog (the last three lines on the photo above) reads:

The blogpost was written on the afternoon of July 21 and includes this photo: 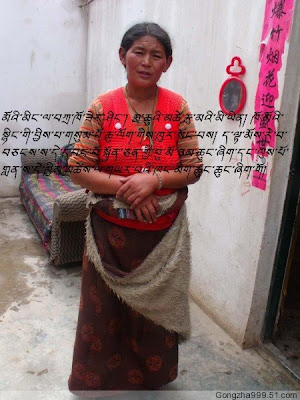 The writing on the photo reads: Her name is Trakho (bkra kho). She is from Machu Tsho Ru. Her beloved children drowned in floodwater. Now, her hope rests with her simple, young, sick handicapped daughter and rents a room from the neighbours.

On the night of 20th July, a flood destroyed villages around Machu County (Dzong). Countless numbers of peoples houses have been washed away. More importantly, three children were carried by the floodwater. Although the mother was stricken with grief, she is searching for her children.

This morning when I arrived, the cries of families who lost everything and the mother of the three children filled my ears and this made me weep. Sadly, the family lost everything; the income earner is not only handicapped but is also of ill health. The family will face great difficulties in the future. Her beloved children and belongings accumulated through blood and sweat have been washed away by the floodwater. Now her life has been plunged into darkness.

I am only a poor student and lacking means to help people of my race. I appeal to brothers and sisters of the land of snows, to think and give support for the future livelihood of the mother and child .