High Peaks Pure Earth has translated a blogpost originally written in Chinese by a Tibetan blogger calling themselves “The Lost Curse” and is a sharp piece on the earthquake in Tibet. The blogpost was published on April 16, 2010, just two days after the earthquake struck.

“The Lost Curse” imagines what questions they would ask in an official press conference on the earthquake. Last year, High Peaks Pure Earth translated another blogpost by “The Lost Curse” that was a biting satirical commentary piece about China forcing Tibetans to celebrate the Chinese Dragon Boat Festival instead of the traditional Tibetan festival of Saga Dawa.

This blogpost on the earthquake is in a similar ironic style that is cutting and thought-provoking and also displays impressive knowledge about Chinese history and traditions. For example, “The Lost Curse” refers to the Han Dynasty’s Zhang Heng. As the China blog “Jottings from the Granite Studio” tells us:

Zhang Heng (78-139) was quite the Han dynasty renaissance man. Despite his fame as a poet of considerable talents, a celebrated scholar of the classics, and an official serving at court, Zhangs greatest and best-known contributions actually came in the field of science and engineering. […] Zhang Heng is perhaps most famous for inventing the worlds first seismometer, the ????? houfeng didongyi. 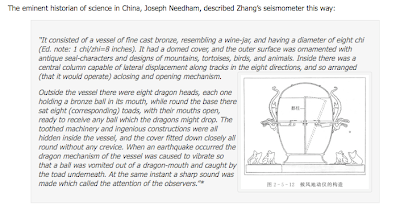 “The Lost Curse” poses a series of questions about official reactions to the earthquake and the relief efforts, along the way mocking the Chinese bureaucracy, drawing parallels with the 2008 Sichuan earthquake, quoting Mao, referring to the belief that animal reactions supposedly should forewarn impending earthquakes and sharply critiquing the Han-Chinese fad for Tibetan mastiffs that the affected earthquake area Jyekundo in Kham is famous for.


High Peaks Pure Earth has been monitoring online reactions to the earthquake by Tibetan netizens, this is our third post. The first post can be read here:
http://www.highpeakspureearth.com/2010/04/earthquake-in-tibet-initial-reactions.html

and the second post can be read here:
http://www.highpeakspureearth.com/2010/04/earthquake-in-tibet-tibetan-netizens.html 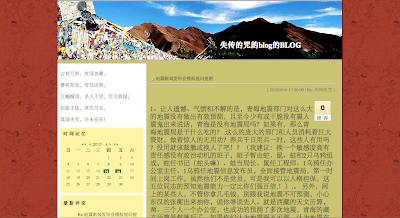 Tentative Questions for the Earthquake Press Conference
by “The Lost Curse”

There are many questions. But for today I will stop here. I will continue to monitor the relief effort. At the same time, I thank the nations people for their support. I thank the brothers and sisters who are participating in the relief effort without regard for altitude sickness.