Chinese internet users have given us some colourful terms such human flesh search engines, where netizens track down individuals for public humilation, sometimes this could be exposing corrupt officials, other times it targets innocent people who have angered netizens. The angry netizens are ruthless in their attack and criticism, the sheer number of internet users in China means that thousands of netizens can be mobilised very quickly and become a force.

We saw this last year during the Tibetan crisis, where a Chinese student from Duke University had her identity and home address posted on the net. Tibetan netizens also engage in vociferous online debates, although, nothing like the angry Chinese netizens. A few weeks ago, the anger of Tibetan netizens was aroused by a post on one of the main Chinese language sites for Tibetans, www.tibetcul.com. On February 6th, Gyarong Dolma (rGya rong sGrol ma) posted photos of wedding of her good friend Lobsang Dundrup to a singer from Ngapa Prefecture Dance Troupe, wishing them a happy and harmonious future.

The photos showed the lavish wedding and the photos also showed the grooms Chu ba (phyu ba) was lined with tiger skin and he was wearing a hat made of fox fur. The brides chu ba is lined with otter fur. (See pictures below) 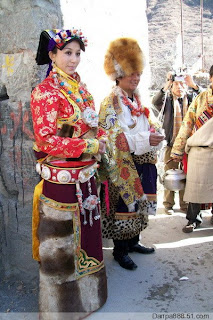 The photos from the original post were quickly re-posted, incurring the wrath of angry Tibetan netizens. Comments criticising the couple flooded the internet forums. Those who follow Tibet news will remember that in 2006, after the Dalai Lama’s injunction against the wearing of animal fur, a wave of fur burning protests took place in Amdo and Kham. Hence the netizens anger and loathing for the couple. 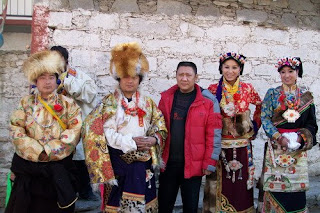 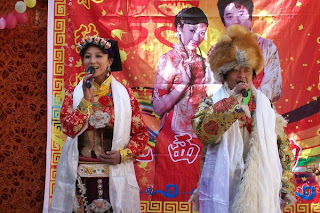 On the ninth day of the first month of 2009, my good friend Lobsang Dundrup had a grand wedding in the Valley of Beauty in Rongdrak (Ch. Danba) County. The bride is a singer of the Song and Dance Troupe of Ngaba Prefecture and she is also a very beautiful Gyarong girl. Wish them a happy and harmonious life and live together for an entire lifetime.

Gyarong pas are really like another race without pride
Without consideration for life lost and suffering [of the people]
Let hope such an ugly custom is not resurrected.

Truly shameful, Ganzi Tibetans are without shame or honour. Did others see that during the CCTV New Year celebrations, the Ganzi Dance ensemble foolishly performed wearing tiger and otter fur, wearing turquoise. We Tibetans still cannot discard from our minds the wearing of fur. This year in Tso jang (mtsho byang) and Tso lo (mtsho lho) there are performances wearing fox hats. 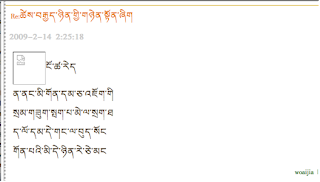 Last you swore an oath, not to wear (fur)
Fur was thrown on the fire
This year, oaths are discarded
Daily, more and more people wearing fur.

I was extremely ashamed when I saw their wedding is that a Tibetan wedding? It really makes m
e question it. No matter how hard I look at it, I feel like it is a wedding between animals, a female otter and a tiger, ho ho, it is indeed extremely shameful. On what kind of basis is their happiness built? Regardless of civilized society or Buddhist scriptures, there is the concept of protecting animals. In present-day Tibetans areas one does not see animal skins everywhere like in the past. When I saw these two people, I was indeed frightened. Who on earth are you two? I am ashamed of you, and I feel sad for you.
February 15th, 2009 by a tourist

[They look] like people but with the appearance of animals.
February 14th, 2009

Some singers like Lobsang Dundrup did absurd things, and the songs sung by them are empty and shallow. It is because their cultural refinement and their comprehensive quality is poor, they do not know how to think about issues. It is rather expected [for them to behave like this].
February 13th, 2009

What you said is right. I think these people are probably protesting against the guru (referring to the Dalai Lama). It has been three years since it has been advocated not to wear such clothes in Tibetan areas, but there are still people who are wearing them. In particular, these people should not do so. They let our spiritual pillars down.
February 13th, 2009

It is obvious against whom those who wear furs are protesting We should not do so. We should learn good aspects and follow the trend of the current time.
February 13th, 2009

Only the Dalai Lamas appeal is to cherish the nationality and treasure ecology.
February 13th, 2009

When many compatriots are glad that we eliminated this bad custom, at the same time there emerged some black sheep. I really hope they are not Tibetan. In this way, this is a comfort for me! I really want to scold them but they are our compatriots and our brothers and sisters. Therefore, I would like to extend my best wishes whole-heartedly. Meanwhile, I would like to advise them to refrain from doing this anymore.
February 13th, 2009

It is probably to cater to some peoples likings to wear such clothes, and it is really meaningless. They probably do not know how to think about issues. When others are sad, they are still putting on a false show of peace and prosperity, and are catering to the likings of others. It is indeed meaningless.
February 13th, 2009

I also support any criticism against those who wear fur.
February 10th, 2009

The satin and silk only wrapped a bunch of grass.
February 9th, 2009

First, we should extend our best wishes to the newly-weds. Hope you live to ripe old ages in conjugal bliss. But it is indeed disappointing to see the clothes and the stage setting of the wedding. Weddings are a highly individual thing, so it is fine as long as the newly-weds themselves are happy. Yet, cant we love our nationality and our beliefs while we love ourselves?

Tibetan robes are a symbol. When people wear them at this moment, should it be a symbol of the sense of national identity? If one loses heart as a Tibetan, and one does not have resonance with compatriots with whom one shares weal and woe, then all clothes are just packaging. The satin, silk and fur only wrap selfish and cold hearts.

When you wear such Tibetan clothes, on the contrary, you do not look like Tibetans any more.
Maybe you do not mind, however, I believe many people will be bitterly disappointed if they see [these pictures].

Anyway, I would like to wish you happiness again.
February 9th, 2009

The Panchen Lama did not wear fur, neither does his daughter. You are indeed tough. You do not act like a human to decorate yourself with the animals life. You are no different from animals.
February 9th, 2009