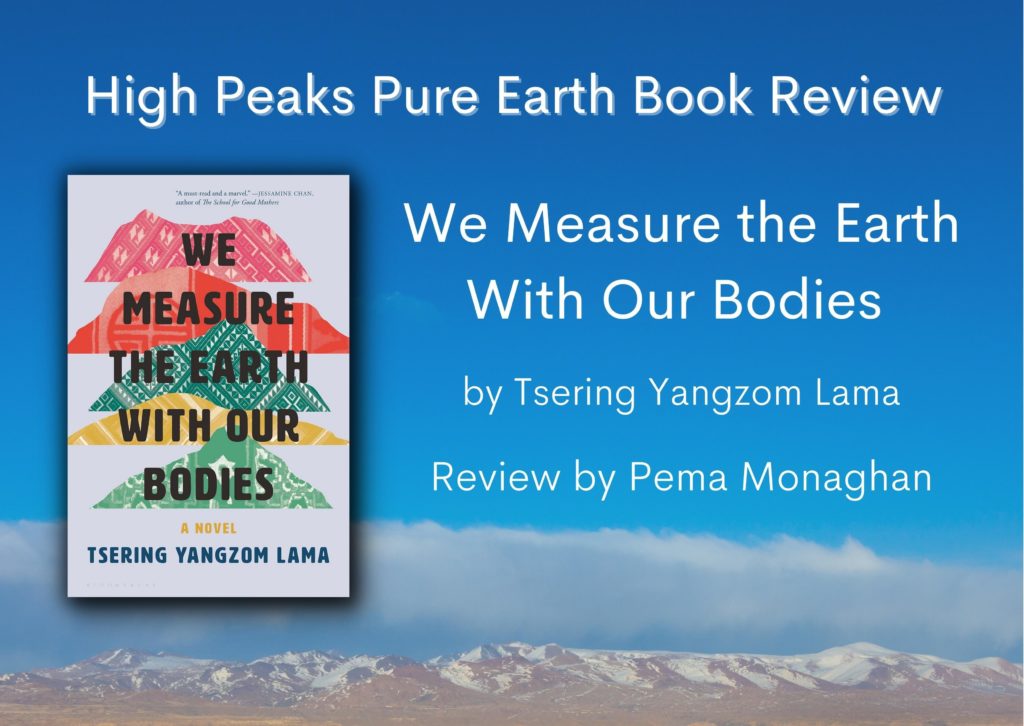 Book Review: “We Measure the Earth With Our Bodies” By Tsering Yangzom Lama
By Pema Monaghan

In Tsering Yangzom Lama’s tender and thoughtful “We Measure the Earth with our Bodies”, several generations of a Tibetan family struggle to speak clearly to each other across trauma, duty, and geography.

Dolma, a second-generation displaced Tibetan woman, has been raised by her mother Lhamo in the Pokhara Tibetan Refugee Camp, with the support and protection of Lhamo’s younger sister, Tenkyi. In the distant background has always been a man, Samphel, Lhamo’s sweetheart.

The novel moves back and forth between the childhoods of the sisters in Tibet with their family, their journey across the Himalayas and their meetings with Samphel, to their lives in Kathmandu, and then the adult life of Dolma.

We meet the young sisters as ‘sharp, outspoken, and loving’ children. Later, as old women, these characteristics have been effaced by their trials. Tenkyi is challenged by recurring mental distress.

As young adults, Lhamo, Tenkyi and Samphel, all doggedly pursuing dreams that take them far away from each other, are repeatedly prevented from finding peace. ‘To be so fixated on a hopeless dream’, Ashang Migmar tells Lhamo, ‘it’s not right’. Their dreams turn sour and hollow them out.

Unfulfilled and crushed by their circumstances, Tenkyi, Lhamo and Samphel all find new purpose in their desire for Dolma to live a life free from suffering, with each parent willing to work themselves into the ground or compromise their values in order to build this future for their child.

In 2012, Dolma and Tenkyi live together in Canada. Tenkyi had moved years ago, taking a cleaning job as a ‘temporary solution’ with hopes of finding work as a teacher that never eventuated. Dolma, now in her early twenties, has joined her aunt. She is in search of a Western education and brilliant academic career in Tibetan studies. Lhamo, meanwhile, remains in the same Pokhara camp she journeyed across the Himalayas towards as a child. Samphel is estranged, a bitter memory in the hearts of Lhamo and Tenkyi.

However Tenkyi’s own life, her attempts to break into Tibetan academic studies and build a life in Canada, are frustrated by the lack of ‘a core sense’ of identity. Her own knowledge of Tibetan cultural history, the root of her studies, and the theoretical frameworks she uses to analyse that knowledge come from a European man who, we later discovered, is in some ways complicit in the great crime that the plot is hinged upon. Dolma’s mother and aunt have never shared their stories with her, and she struggles to connect with the objectifying manner in which the academics discuss the pain of her people. She is straddling a chasm.

Tenkyi and Lhamo’s reluctance to discuss painful experiences with Dolma contrasts with the sisters’ own relationships with their Amala. Ama, we learn from Lhamo in the first line of the novel, was an oracle, considered the saviour of an entire village, and the figure of brash self-confidence in a leopard cloak and five-pointed crown. While still in Tibet, Amala tries to teach her daughters the secrets of their lineage – they also have the oracular power, and it will break their minds if they don’t learn to use it correctly. Little Tenkyi particularly is required to go through difficult, overwhelming and beautiful ‘lessons’. She is given access to their matrilineal inheritance and let into her mother’s ‘secret world’.

However, as soon as they cross the border, things change. Ama will no longer don the cape – being taken from the land she derives her strength from has turned the powers dark for her. The girls are told by the adults in their lives not to look into their dreams, not to seek their mother in their minds after her passing. The channel of communication, the access to ancestral knowledge, has been bricked over.

Sometimes it feels as though everything could change for the characters. There are moments when they break through the stifling expectations to be ‘devout, quiet’ and pure to ask in a clear voice for what they want. However, these truth tellings are always met by suffocated emotion on the other end of the phone or in the lack of a returning letter. Polite effacing of desire stops them from ever getting close to one another.

In the end, the inability to speak about their lives back home, the traumas they endured at the end of their lives in Tibet, and during their long journey to Pokhara, Kathmandu and then Canada, are the inheritance they pass down to Dolma. Her desire to love and care for her family members is met with an impassable fence. She can’t help them heal, she doesn’t feel she knows anything about them. ‘She never told me anything’, Dolma says of her mother, having just missed her funeral pyre, once again not permitted into the darkness. Her healing, and the healing of Samphel and Tenkyi, comes when her frustration and heartbreak pushes her to confront them about the past in the form of the Nameless Saint, the little ku that appears where it is needed.

Lhamo’s last wish for her daughter is not for a Western education, never having to work a day, or for a life free of suffering. ‘Something has been lodged in this throat’, she tells Samphel when she visits him in his dream right before her passing. ‘Speak to [Dolma] without holding anything back… I want her to speak freely.’ It’s a return to a dream Lhamo had for her own and Tenkyi’s lives. ‘For this freedom, our parents laid their bodies on the mountain paths.’

*Pema Monaghan is a Tibetan-Australian writer and journalist from Noongar boodja, now living in London. She has recently written for Still Point Journal, gal-dem, New Rules: Play during the Pandemic, the Willowherb Review, Ache magazine, and Extra Teeth magazine. Along with the artist Oscar Price, Pema runs Takeaway Press, a small house that publishes collaborations between artists and writers.