High Peaks Pure Earth has translated a blogpost by Dolkar Tso, wife of businessman and environmentalist Karma Samdrup, which was written on June 22, 2010 and posted on her blog on June 23, 2010. The blogpost is an account of the first day of the trial of Karma Samdrup which took place in Yanqi county, Xinjiang, but was online merely a few hours before being deleted.


The screenshot below shows what Dolkar Tso’s blogpost looked like and was posted on Woeser’s blog earlier today along with a full re-posting of the blogpost. 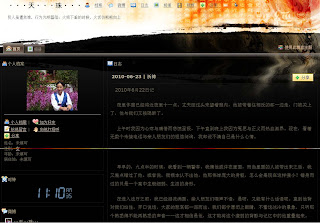 Woeser had previously also posted this photo of Dolkar Tso and her husband Karma Samdrup on her blog: 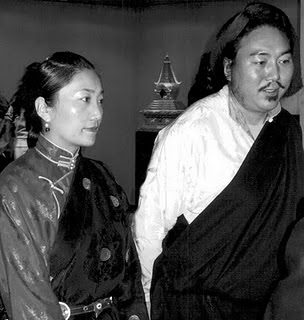 Dolkar Tso’s blogpost gives us an insight into the emotional feelings during difficult times and also documents Chinese legal proceedings from the point of view of a lay person. The details of the prison conditions come from Karma Samdrup himself, a rare first-person account. The lawyer that Dolkar Tso refers to in her blogpost is Karma Samdrup’s lawyer Pu Zhiqiang, a respected civil rights lawyer in China who himself is updating events surrounding the case on his blog.

The hearing was adjourned, it was almost 11 oclock at night. My husband turned his head, peeked into the court. They took him away in the other direction and shut the door, we were once more separated.

In the morning I had felt so distressed and hurt that I only felt extreme grief, from the afternoon till the evening I had felt anger from all that justice and injustice. Now, after having received numerous missed calls and many text messages asking for news, I just dont know anymore what I feel.

Early in the morning, around 9:30 am, I saw a police vehicle, I guessed that he might be inside and when the people from inside the car were led out I almost missed him. Or rather, I just didnt recognise him. How could his tall and upright body become thin and small? The body that passed me looked like one of a slim and fragile college student. ?

Before we entered the court, I was already in tears. Relatives and friends didnt speak a word, well, what was there to say?! Only when he stood there with his back to us, and started speaking, everyones sadness just poured out. We all rather closed our eyes, we didnt want to look at this cold shadow, we just wanted to listen to this so very familiar voice  only this was really him, only this really managed to turn that poor fragile shadow into the person we remembered. ?

I never thought his cheekbones could be this high, his chin so pointy, his arms so skinny, theres nothing left of his pot-belly. And he even tells us that over the past 20 days he had already recovered quite a bit, he had started eating regularly and does not have to suffer any maltreatment anymore.

Then he paused for a while, Today my friends and relatives are here, and there is probably a lot I shouldnt say. The account we heard afterwards exceeded our worst imaginations, we heard about hundreds of different cruel torture methods, maltreatment around the clock, hitherto unheard of torture instruments and drugs, hard and soft tactics, and even of fellow prisoners being grouped together to extract a confession. If he did not reveal certain details he would be mentally tormented. If he wanted to eat or go to the toilet he had to write an “IOU”, an “IOU” which has already amounted to 660,000 RMB. The purchased food would first be crushed by people using their feet, there would be beatings for no reason, this was common and occurred too many times to count. He said in a sad voice that he had already prepared for death and he had written a letter to tell his relatives what to do. Two elderly interpreters had red eyes and started crying bitterly.

The lawyer also almost started crying. During the afternoon trial, the submission of evidence and translations was an endless process, endless but extraordinary. All of the evidence that was temporarily put aside, to my understanding, contained many loopholes and contradictions. Even the lawyers seemed to think that much was illegal in the procedures and they raised their doubts. It was just a pity that the panel discarded them as unrelated to the respective issue or said that this has already been clarified. Sitting in court were two lawyers and a defendant – three amazing people. Justice gives people an incomparable power, for a moment I didnt think of all the disasters, I was entirely absorbed by this optimistic wisdom, surrounded by hearts of such warmth, I thought that my husband would also feel it. I clearly saw him turning his head and when he saw us his eyes were smiling. Or maybe we are fortunate people, fewer and fewer people receive such noble blessings. ??

I really dont know after this endless but extraordinary afternoon what will follow tomorrow. But we are all sure that our Karma Samdrup is no criminal, he is innocent, an unyielding and magnanimous person who can withstand any storm. We all know that he is not a criminal! As long as the court acts justly and fairly, he will certainly come back to us very soon. He will come back home and embrace his two daughters and also embrace freedom  this is the life, which he should live. ??Please listen to the prayer, which I, this rushed and weary, burdened but hopeful woman am saying. An effect presupposes a cause. May Buddha protect us.