High Peaks Pure Earth has translated a blogpost originally written in Chinese by a Tibetan blogger calling himself “The Lost Curse” and was prompted by the Dragon Boat Festival holiday* (端午节 – duanwu jie) which this year fell on May 28th.
The Chinese government grants a 3-day holiday for the Dragon Boat Festival that this year also coincided with the Tibetan holy month of Saga Dawa (sa ga zla ba). In different years of his life, Lord Buddha took birth, achieved Enlightenment and passed away attaining Nirvana, all three of these important events are celebrated in the festival of Saga Dawa.
Which festivals to celebrate and which festivals not to celebrate have been the subject of much debate this year for Tibetans. Perhaps the most well-known example earlier this year was the decision by Tibetans in all Tibetan areas not to celebrate either Chinese New Year or Losar, Tibetan New Year. At the same time, it was reported that Tibetans were forced to celebrate Chinese and Tibetan new years against their will. Not long after, a newly designated ‘celebratory day’ was introduced by the Chinese government in the form of “Serf Emancipation Day”.
This Tibetan blogger has cleverly used the enforced celebration of the Dragon Boat Festival instead of Saga Dawa as a starting point from which to ruminate on the greater issue of patriotism and concepts of a nation. By invoking Chinese historical figures and writing in an ironic style (that continues in the comments), this blogger has managed to avoid making overtly political statements related to Tibet.
Interestingly, one politically provocative was removed from the blog (High Peaks Pure Earth has translated it below the article), it is unclear who removed it and for what reason. However, the other comments are worth reading and show the familiarity and friendship between the blogger and the readers.

*The original link http://danda-466572.tibetcul.com/59786.html only works with Internet Explorer. 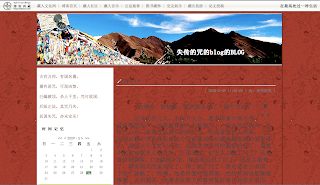 To All Those Longing and Hoping, Summer is Approaching,
the Dragon Boat Festival has Arrived!
By “The Lost Curse”

Recently, the work unit held a mass meeting demanding that the country’s cadres not celebrate the Saga Dawa Festival and also instructing their families not to participate. Three days ago, the work unit held a small meeting demanding all of us to correctly celebrate our Dragon Boat Festival and commemorate the patriotic poet Qu Yuan. After the meeting was over, I fostered a great interest towards this patriotic poet, who during his lifetime loved his country and after his death loved his country more than ever. Personally, I don’t remember history that well; I barely remember how Qu Yuan died; I cannot recall if he fell from grace with his superiors, lost all hope in his official career, took too many blows in life and jumped into a river or if he, facing all the corruption among officials, seeing the GDP drop severely, could not be bothered anymore and hence jumped into a river? Or did he jump and sacrifice his life when the Qin Dynasty was established and the northern as well as the southern sphere of his home soil (the Chu State) had disappeared? If he jumped because he saw his small homeland vanishing in an instant, well then he really was a truly remarkable patriot, and his end was really very tragic.
Talking about patriotism, Murong Fu, as vividly put in writing by the old fellow Jin Yong, was probably even more patriotic than Qu Yuan; he devoted everything to his thoughts and ideas, performing the greatest martial art stunts in order to restore his country (the Yanguo). But in the end this was not achieved, and he became insane. He was also a truly remarkable patriot, and his end was also really very tragic.
Now someone will surely ask: how is it possible that the two greatest patriots Chinese history ever witnessed are both so tragically tainted? Well, this is why: the surge of world events is gigantic; those who follow prosper, whereas those who oppose perish. These two people both opposed the great undertaking of uniting this ancient nation named China. They did not intentionally nurture the desire to divide the nation and to split China. Yet looking at it objectively, their behaviour did work towards obstructing the unification of the motherland and the great revival of the Chinese nation, going against the interest of the Chinese nation as a unit, hurting the feelings of the Chinese people who have the idea of unity. This is exactly why writing poems was fruitless; jumping off a building or into a river didn’t work either, and even if Qu Yuan had become the King (of the Chu State), would it have made any difference? Or would Murong Fu who had become the son-in-law of the Western Xia Dynasty’s emperor have been able to restore his country?……On a different note, at present, as a Marxist, one’s aim would be to eliminate the differences between countries and ethnic groups, to implement communism, and to liberate all human beings. Patriotism shouldn’t be growing as the size of a country diminishes; it should be: the bigger the country the greater the patriotism; along the lines of, it should be so until all its mountains and rivers have turned “red” and until there is no country to love. Hence, why tell people to excessively commemorate Qu Yuan? Isn’t it enough to just stay at home and eat some zongzi (rice dumplings)…… But the general masses can still say: if one cannot love a small country, how can one love a big country? We common people should still love Qu Yuan’s patriotic spirit, no matter whether what he loved was Hunan, Hubei, Henan, or Hebei. Besides, we’ve all got some days off now, everybody enjoy some nice food, there’s nothing wrong with that… so, let’s celebrate!
Today is the Dragon Boat Festival, let’s celebrate, and eat some moon cakes! Lha Gyalo!

Comment:
Oh, there’s a lot going on here. It seems I’m a bit late, the Dragon Boat Festival was a month ago, really sorry! I’m still in the process of acclimatising; everyday my brain feels muddy and obtuse, there’s no leisurely sophistication anymore, it’s all in black and white, all in decimal points, like a swarm blowing into my face…painful!
Sigh, long time no see. My deskmate is as charming as ever. Enjoying the festival and writing a short commemoration for an ancient honoured personality. It’s just showing respect for the patriotic Qu Yuan. You are a good cadre! I’m thinking that cadres who are this obedient will be above me in the future as sports committee members or as art and literature committee members, wow, amazing!!! Committee member comrade, what are you going to do on July 1st (the day the Chinese Communist Party was founded in 1921), and then it’s August 1st (the day of the founding of the People’s Liberation Army in 1927), and after that it’s October 1st (the day of the declaration of the People’s Republic of China in 1949). The good cadres will be really busy! I think highly of you!!!
[The following comment was subsequently deleted from the blog]
Comment:
Those stupid Tibetans! They just don’t deserve to stay in China, just get out of here!
The Lost Curse’s reply:
You are hostile towards Tibetans; you are against Tibetans speaking out! Who are those stupid Tibetans? Apart from me, which other ones are there? Tell me! Idiots should get out of China? Chinese citizens should be deported because they’re stupid? According to which paragraph of the law is this? Are the stupid Tibetans in fact a foreign nation? Should we apply the same law that is used against foreigners? I see, you don’t only know anything about law, you are actually also a separatist!

June 12 2009
Comment:
Hey, zongzi actually taste really good.
The Lost Curse’s reply:
In terms of taste, they are quite good, although I don’t really like eating sweet things.
They say that the Koreans have already successfully declared the Dragon Boat Festival as Korean cultural heritage, and the Chinese are naturally very unhappy about that. But taking zongzi as an example, South Asia is the home of rice; many have the habit of eating rice wrapped in a palm leaf, for instance, the Dai minority, the Thai people etc. Each one of them differs and is unique in terms of taste and style. In the future we should jointly hold a South Asian zongzi Festival, wouldn’t that be great? You would approve by raising both of your hands, right? Yes, the world’s people unite!

June 1 2009
Comment:
Haha! A most intriguing piece of writing!
Be grateful, be happy, eat zongzi, commemorate Qu Yuan, I’m brimming with tears…The Saga Dawa Festival has nothing to do with zongzi, nothing to do with Qu Yuan, we just have to yield in order to avoid conflict…
The Lost Curse’s reply:
But we are happy! We are in their favour: let’s take good care of ourselves. Let’s not leave the house (let’s look after each other), we might get lost; let’s stay at home with our brothers and sisters, eat zongzi, which our forefathers have never eaten, and yearn for a patriot, which our forefathers have never heard of…!

30 May 2009
Comment:
I always thought that the Dragon Boat Festival is our greatest celebration, our act of kindness. Let us reject this extremely ignorant and backward religious Saga Dawa Festival, and grant us the exclusive authority to celebrate the Dragon Boat Festival. Some Koreans say that the Dragon Boat Festival is theirs; some countries’ people are just really irritating. I am currently at home feeling deeply thankful, eating some zongzi. Patriotic feelings will arise naturally.
The Lost Curse’s reply:
It is!!! Celebrating traditional Chinese festival really is such an act of happiness! Eating jiaozi (dumplings), eating tangyuan (stuffed sweet dumplings), eating yuebing (mooncakes), eating zongzi, eating…eating…eating…eating…eating… You didn’t eat the wrong food, right?! Today’s the 29th; do we not have to eat yuebing? You definitely mustn’t eat the wrong thing…