High Peaks Pure Earth has translated an anonymous letter that appeared on a Tibetan blog on October 19, 2010, this was the time when Tibetan language protests were taking place in Amdo.

The letter was posted onto this blog on TibetCul but had already been removed just two days later. The blogpost does not provide any details or commentary on the 10 points contained in the letter. The blogger has just made a note that he copied the posting from somewhere else on the internet.

Writing letters or petitions to the central government is not an uncommon way to air grievances in the People’s Republic of China today and it is a method of appeal that Tibetans have used consistently over the past few decades. Perhaps the most well-known examples would be the tenth Panchen Lama’s secret 70,000 character petition written to Mao Zedong in 1962 and Baba Phuntsok Wangyal’s series of letters to Hu Jintao.

However, ordinary citizens have also been delivering petitions to the authorities, memorably last year in December 2009, it came to light that over 30,000 Tibetans had signed a petition in defence of imprisoned Tenzin Delek Rinpoche.
*Update* Thanks to a reader with an astonishingly good memory, it has been pointed out that this letter first appeared on a TibetCul blog in April 2008 and was featured on China Digital Times. Do check the CDT link for interesting comments that also appeared on the blog in response to the post. The blog that it appeared on now seems to be completely devoid of content: http://tibetanwishes.tibetcul.com/ It is interesting that the post suddenly reappeared at a relevant time when Tibetan language was very much on the minds of Tibetans… and it’s also worth noting that this time it lasted less than 48 hours online. 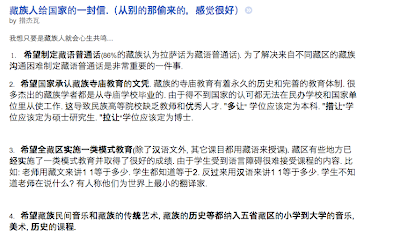 I think that as long as you are Tibetan, this will evoke your heartfelt sympathy: