The Tibetan blogs are now coming alive with posts and there is a great deal of excitement and celebration about the return of the websites.

High Peaks Pure Earth has translated two posts, one is a short report criticising Tibetan cadres and a longer post presenting an interesting critique of Losar (Tibetan New Year) celebrations that was broadcast on TV.

It is interesting to note the recent changes in content of the songs and comedy sketches. However, we are not sure whether the blogger is referring to the Qinghai or TAR New Year’s Eve broadcast. The Qinghai broadcast can be seen on YouTube here. 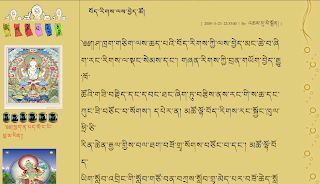 Most of the Tibetan officials in the Chinese government use their posts and power to insult people of their own race and become servants to others.

Taking pride in this kind of work, selling land and closing companies are becoming evident: the sale of the of weaving factory by official Rinchen Gyal of Tsolho Tibetan Autonomous Prefecture and the sale of the Tibetan Middle School’s land by school head Benta.

Aren’t we allowed to voice our protest about these things. 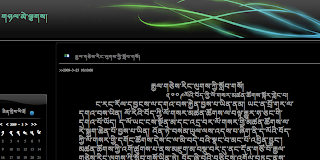 Because of my great interest in listening to music and watching dance on TV, I liked to enjoy the New Years Eve Show on TV. As usual I was eager to watch the TV show with high expectations. However, I did not expect that this years TV show would leave so many uncomfortable feelings in my heart. The prevailing content of patriotic education wrapped the theme of the whole show from the beginning to the end. The main theme of the show was supposed to praise the outcome of good policies and the improvement of living conditions after the so-called peaceful liberation and democratic reform in Tibet. One thing we should keep our mind on is that there is hardly a piece of the show that does not contain an element of patriotic education. It seems that the wounds in the hearts of the people from the Cultural Revolution have disappeared completely.

As a matter of fact, there are ample things in Tibet which we should appreciated. There are also many problems that should be addressed before the public. Being writers of lyrics and plays, it is not the right way to act like a one-eyed cow eating the grass and telling only one side of the story. Those folks who claimed themselves as the advancers, mouthpiece of the masses and the engineers of human souls have already forgotten their obligation of telling the truth. They are trying to escape from reality. This is a huge tragic moment in our history.

Language and script are the soul of a nation. It would be the great loss of a nation if its language is not preserved and widely used by the people. If a nation cannot carry on its culture by using its own language, then the nation will eventually die out and what will remain behind is just an empty name. My heart suffers tremendously by the fact that Tibetans are forced to use an alien language while having their own language.

Tibetans are becoming miserable people now. Although our body is nourished by the circulation of the blood of the red-faced people, and our bone marrow is made of mountain snow, unfortunately we are encouraging our children to learn Chinese, as well as English, instead of our Tibetan language. Many people who are Tibetan are so proud of altering some Chinese words and mixing Chinese words when they speak publicly.

We Tibetans compromise our own interests all the time. For instance, at the New Years Eve TV show, all the singers, namely Yadong, Yongdrong Gyal, Tanzin and Tsering Samdrub sang their songs in Chinese and 80% songs of the TV show were sung in Chinese. It was even worse to see an entire short TV sketch written in Chinese which intentionally prejudices Tibetan language, makes fun of Tibetan words and harms the beauty of the Tibetan language. It is worth quoting a statement from the short TV sketch here: As a Tibetan, it is shameful not to speak Chinese; they tried to translate this TV sketch into Tibetan to convince people, but the audience found that it was nothing more than a meaningless stage farce in the end.

One of the sad things about the sketch is that the author of this TV sketch is a well-known Tibetan writer from the region. This guy has no sense of responsibility for his nation. I consider this kind of person, nothing more than a criminal who tramples on the language of the Tibetan nation.