High Peaks Pure Earth has translated a Tibetan blogpost on the subject of Tibetan festivals and celebratory days. On January 16th 2009, the TAR Regional Government announced that March 28 of every year will be observed as “Serfs Emancipation Day”. The institution of a new celebratory day in Tibet is clearly an attempt to alter Tibet’s historical memory and enforce greater obedience and linkage to China.
A blog by Lamlak (lam lags) reports that the County government is forcing Ngaba Monastery to change the dates of new year and winter religious ceremonies to coincide with the Chinese New Year – this year, the two new years are a month apart. On Tibetan blogs, there has been much discussion about this year’s Tibetan New Year, Losar (lo gsar).A blogger called A thub (a thub) confirms what Lamlak has written. A thub says that everyone is being forced to celebrate Chinese New Year, not just in the monastery but the ordinary villagers in Ngaba are also being told the same.
Another blogger named Mangbu Rukam (Mang bu rus skam) noted on his blog that there had been much discussion on the internet about whether Losar should be celebrated this year or not. Rukam also discusses if Tibetans should institute the same date for Losar amongst the Tibetans, as traditionally Losar is celebrated on different dates in different parts of Tibet.
As evidence of this ongoing debate about whether to commemorate or to celebrate, a text message is being circulated amongst Tibetans in Tibet and around China. High Peaks Pure Earth has the following blurred photo of the text message in Chinese: 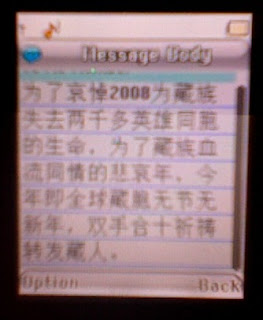 The text message reads: To mourn the lives of more than 2000 Tibetan heroes and compatriots who died in 2008, for this sorrowful year for Tibetans whose blood was shed, in the Tibetan Community all over the world, new year and all festivals won’t be celebrated, holding the palms of the hands together in prayer, forward [this message] to Tibetans.
Finally, for a poem by Woeser about Tibetan festivals, please go to this translation by Ragged Banner.
Blog by Lamlak (lam lags) 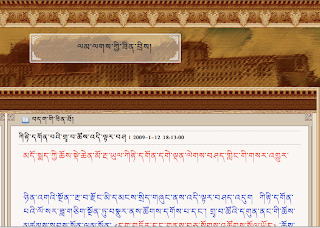 News from Kirti Monastery in Amdo Region
A few days ago, the People’s Government of Ngaba County declared that Kirti Monastery should celebrate the upcoming Chinese New Year and all winter rituals which actually take place during the Great Prayer Festival must be performed one month earlier than its actual date. The reason is because the people of Tibet are to celebrate Chinese New Year as Tibetan New Year. All the monks in the monastery are planning to return to their homes.
As a matter of fact, this is just taking control of freedom of religion. The celebration of May 1st (Labour Day) and October 1st (the celebration of the founding of the PRC) have come about by Chinese government order.
Religious belief is something in the mind of the people. How can it be proper to force people to celebrate their religious festival that is in no accordance with the religious calendar. Now, it is really difficult for the Tibetan people to predict whether the Great Prayer Festival will take place or not this year. We are not sure whether all these notices come directly from the State Council or not. There are many people coming to Ngaba Dzong, who have no idea about Tibetan customs and are promoting activities that have no relevance to our culture.
Comments:

Friend, thanks for the news. This is really astonishing! If Tibet is being developed as planned by the government of China, then Tibet will disappear one day. Therefore, for the sake of our nationality, the only thing we can is to be more alert of our situation and take greater responsibility.

Corruption is prevailing in every corner of society and the intellectuals and politicians are becoming tools of politics, then who will taking care of the wellbeing of the ordinary people?

After reading this kind of news, what we can do?

The Red Government of China is truly a bloodsucking, brutal regime.

In the latest issue of @MekongReview our very own @abronaaden has not one but three poems/ hear hear... https://mekongreview.com/my-rong-tongue-prodigal-daughter-the-colour-of-silence/

If you’re less than impressed by our selection of Tibetan jokes, feel free to send in some others! Just like this reader did, thanks!