High Peaks Pure Earth has discovered that netizens are posting reports of protests in their region on both Tibetan and Chinese language blog sites. We have found these two posts, the first was posted as a comment on Woeser’s blog. The second post was on the Tibetan language blog http://www.tibetabc.cn/u/father/archives/2009/200922012619.html and refers to protests in Lithang that have already been reported on in the press, read more reports from the Washington Post and Radio Free Asia. 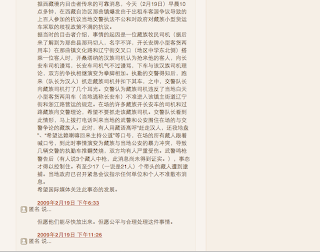 According to reliable accounts by eye-witnesses in Tibet, sometime after 10am this morning (February 19th), in the town of Nagchu in the Tibet Autonomous Region, a protest involving over 100 participants broke out due to the dispute over potential guests for taxi drivers. They protested against the traffic policemens injustice in enforcing the law and the discriminatory policy against the Tibetan drivers of mini-vans implemented by the local government.

According to the witness account, the cause of the incident was when a Tibetan driver (later it was learned that he is a herdsman from Namarche [????????? na dmar che, Chinese: ??? na muo qie] of Nagchu County. We do not know his name. He drives a Chang-an mini-van which can be used to transport both cargo and passengers) picked up a passenger at the intersection between Wenhua Road and Niaoning Road of Nagchu town (to the north side of Nagchu Prefectural Middle School), the Chinese Santana driver thought the Tibetan driver picked up his passenger, so he cursed the Tibetan driver vehemently. As the Tibetan driver could not restrain his anger, he came out of his car and started to reason with the Chinese driver. Then their dispute escalated into physical fighting.

At that moment, somebody shouted loudly in Tibetan drive away the Chinese and return the land to us, hope the Dalai Lama will come back to uphold justice and other slogans, then all Tibetans also started to shout slogans. By this time, the incident had already escalated into violent conflict between Tibetans and the local public security officers, which resulted in a few traffic police cars on duty to be overturned and burned. There were people from both sides who were seriously injured. Only after the armed police fired their guns into the air to warn people (some claimed that three Tibetans were shot, but this has not been verified yet) did they bring the situation under control.

At least 17 (some say there are 21) Tibetans who were leading the protests were arrested. The local government has already convened an emergency meeting ordering that no work unit or individual are allowed to spread the news.

Hope the international media will pay attention to the development of this incident. 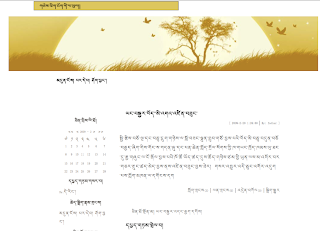 Once again a few Tibetans were arrested:

On 15th and 16th [February] in Lithang, lead by Lobsang Lhundrup (blo bzang lhun grub), 16-18 Tibetans protested against the Chinese government, calling for the return of the Dalai Lama and the release of the Panchen Lama. Within less than 2 hours all the protesters were severely beaten and arrested. My apologies for not being able to bring the news sooner.