As Losar (Tibetan New Year) is quickly approaching this year on February 14, and Tibetans in Tibet and all over the world are proudly asserting their Tibetan identity, what better way to start the year 2137 with a traditional bowl of hot steaming Gu-thug on Friday evening?

High Peaks Pure Earth would not want anyone to partake in this tradition without knowing the ins and outs! High Peaks Pure Earth is therefore very grateful to Tsering Dhondup for allowing us to post his translation of “The Tradition of ‘Gu-thug’ before Losar” taken’ from “The Collected Works of Chabpel Tseten Phuntsog” (‘chab spel tshe brtan phun tshog gi gsung rtsom phyogs sgrigs’) and first published by China Tibet Educational Publishing House (‘krung goi bod kyi she rig dpar skrun khang) in 1993. This article has also previously appeared in a newsletter published by Tibet Foundation, based in London.

Many Tibetans will be spending Gu-thug night far from home. Below, High Peaks Pure Earth has posted a 2008 video made by Tibetans studying in universities in Beijing. The video shows them preparing Gu-thug together and playing games. The video has three songs as its soundtrack, two Tibetan songs and one Chinese song. The first Tibetan song is by exile Tibetan pop star Phurbu T Namgyal called “Phayul Mayul”, meaning “Fatherland, Motherland” and the second Tibetan song is by the most prominent Tibetan singers in Tibet, Yadong, Kunga, Tsewang and Gangshuk called, “Sems Kyis Log Phebs”, meaning “Mentally Return”. Both songs urge Tibetans to unite and assert their identity strongly.

The Tradition of ‘Gu-thug’ Before Losar

On the eve of the pen-ultimate day of the outgoing year, i.e. the 29th day of the twelfth month according to the Tibetan calendar, most Tibetans in and outside Tibet uphold an ancient folk tradition by having a family get-together for a special dinner called ‘Gu-thug’. Many people wrongly think that ‘Gu-thog’ derives its name from the nine different ingredients added to the broth when in fact it’s a reference to the ‘thugpa’ taken on the 29th day.
This ritual symbolises the banishment of all evil and malevolent spirits that may be lurking in the house-hold. It appears to be a form of ancient folk rather than religious tradition of exorcising evil spirits because no monks and ‘tantric’ practitioners, whether Bon and Buddhist, are invited to participate in the ritual ceremony. The ritual involves neither prayers nor making offerings to deities for blessings or favours. The secular origins are evident from the fact that all members of the family, male and female, old and young, unite to share the ‘Gu-thug’ and then ritually drive out all evil spirits without help from holy men.
Given the regional variations that have occurred during the course of thousands of years, the following description of ‘Gu-thug’ ritual is primarily based on the tradition peculiar to the Tsang region of Central Tibet, according to Chabpel Tseten Phuntsog on whose accounts this article is based.
The 29th day of the last month may be seen as a ‘spring cleaning when the family busy themselves in dusting, cleaning and tidying all the rooms. The layers of dust, soot, grime and all filth accreted during the year are got rid of, as much as possible. As the day wears off, it’s time to start preparations for cooking the ‘Gu-thug’.
Unlike the usual broth of meat in which small chunks of kneaded dough is cooked, care is taken to add special dough balls of varying shape and design, (see Table A) each supposed to symbolise the character trait of the person who draws it in his or her bowl of porridge. Twelve other dough balls of identical shape and size are made in which are inserted objects symbolising different human characteristics (see Table B). These special balls are dry-baked slightly on a fire so that they would hold their shape once they are mixed in the boiling stew of meat and chunks of dough. In addition, it’s become common to add nine different ingredients such as cheese, radish, peas, ‘droma’ (wild sweet potato), salt, pepper, meat, dough balls, etc.
Another group of the family members may busy themselves preparing the dough effigy of a human figure to serve as the scapegoat for ritual banishment. The effigy is always placed in a broken piece of pottery or any other worthless utensil or expendable container. All around the effigy are placed all sorts of things such as dregs of tea-leaves, ‘bang ma’ (leftover grain after barley beer is made), bits and pieces of rubbish collected during the day’s cleaning, etc. 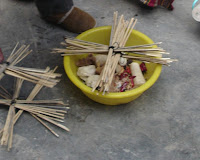 Then the members of the family gather and begin the ritual cleaning of oneself by rolling and wiping from head to toe with pieces of kneaded dough held in each hand.
Whilst rolling, rubbing and wiping oneself, one is supposed to face the dough effigy and say aloud things like, “Hey, you Scapegoat! Take away with you all sorts of pain, hurt, physical ailment, mental afflictions; all the four hundred and twenty four kinds of diseases and all of the eighty thousand kinds of impediments induced by  malevolent spirits that strike during the course of 360 days or twelve months of the year and any other such disagreeable things that remain. Take them all with you across the great limitless ocean! No taking chances here! 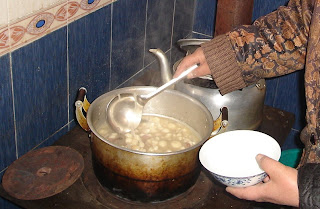 Finally, after about sunset, members of the family take their seats according to age and seniority in readiness for the ‘Gu-thug’ broth to find out who draws what kind of character predicting special dough balls. Traditionally, two empty bowls are placed in front of the family elder. Then the lady of the house starts serving the ‘Gu-thug’ with her eyes covered with a white sash to ensure impartiality whilst serving the prophetic dough balls. 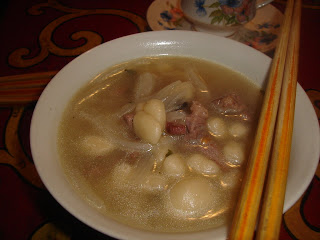 Members of the family begin to help themselves to the ‘Gu-thug’ with mixed feelings. The special dough balls are fished out to discover what symbolic dough ball one has drawn. The discovery of positive predictions attract envious comments and congratulations but those who draw the negative predictions could feel very embarrassed as everyone seems to rejoice in having a laugh at one’s cost. This is an occasion for great commotion and laughter depending on the person concerned and the draw made. The favourable dough balls drawn are collected in one bowl and the negative balls in the other bowl. At the end, each adds a bit of their left-over ‘Gu-thug’ around the Scapegoat effigy. The bowl containing the negatives draws are also poured around the Scapegoat. The bowl with the positive symbols are taken upstairs or on the roof-top. 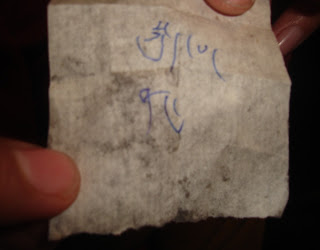 Then follows the actual ritual of exorcising the evil spirits from the household. Two younger male members of the family carry a flaming torch fashioned with cloth, straw or bramble, and go from room to room shouting menacingly “Come out! Come out, you evil spirits and demons!” A female member of the family then carry out the broken pottery or container with the Scapegoat mired in a pile of leftover food and refuse. The men with the flaming torch follow her in mock chase of the evil spirits. Others clap their hands in ritual to signify good riddance. Then the door is tightly shut behind. 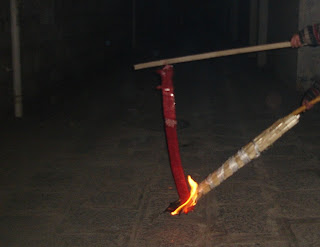 A significant point to note for those escorting out the banished Scapegoat is not to cast any backward glances towards their home while going out and not to look back towards the castaway Scapegoat while returning lest the evil spirits follow them home. The Scapegoat is placed at the nearest cross-road and the flaming torches are also left there. Often, as people from different families in the neighbourhood gather at the cross-road for the same purpose, they all linger on to sing and perform circle dances as a celebration of the successful banishment of the evil spirits.

In the family home, they have to keep handy a tinder and bunch of dry bramble, a pail of water, ladles and bucketful of tsampa. As the Scapegoat escorts return and knock on the door to be let in, a voice from inside challenges them, “Our door needs a description before we can let you in.” And in response, the returning escorts sing, “Open up, the wooden-frame above the door is made of yellow gold. Open up, the thresh-hold below is made of turquoise. Open up, the four frames are made of purplish ‘mchong’ stone. Open up, the ‘melong’ frame is of red sandalwood. Open up, the door bolt is made of white conch shell.”
Finally, those inside hurriedly kindle the bunch of dry bramble and open the door.  As the escorts hurriedly walk in and leap over the crackling bundle of bramble, others from the sides douse them with water and sprinkle tsampa over them as ritual cleansing and prevention of any evil spirit that might attempt to sneak in with them.
Then follow a happy period of drinking changand merry making with songs in praise of those who had drawn positive character traits and teasing of those who had drawn negative character traits, who are often parodied according to what kind of person they are supposed to be. The partying and merry making lasts until the wee hours, to mark good riddance to all things negative and to usher in the New Year that is hoped to bring health, happiness and success to all the members of the family.

Table A – Dough balls of varying shapes and their symbolism

Leave a Reply to pasang Cancel