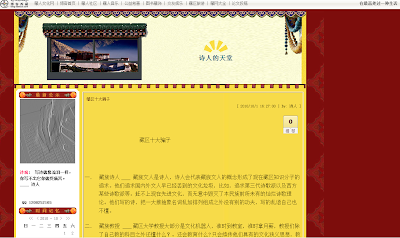 High Peaks Pure Earth has been following a blogpost titled “The Ten Greatest Tibetan Swindlers” that was originally posted on Penpa Tashi’s TibetCul blog on October 1, 2010. For unclear reasons, the original post on http://penpatashi.tibetcul.com/107391.html is no longer accessible (the rest of the blog is unaffected), it was either removed by the author or removed by the TibetCul administrators.

The post created a big storm amongst Tibetan netizens when it was first published and was shared widely amongst Tibetans on social networking sites such as RenRen.com. Notably, some Tibetans criticised those who posted the article, calling them “extremists”, advising them to remove their posts.

It is rare in the Tibetan blogosphere within PRC to come across such a critical and divisive blogpost, focusing on what the author sees as negative aspects of Tibetan society. According to his blog, Penpa Tashi is based in Kunming, Yunnan province, and his post does seem to focus on Tibetan areas of Yunnan, such as Dechen Prefecture. High Peaks Pure Earth readers may remember a poem from January 2009 titled “Silent Dechen” in which Dechen’s population were mocked as not being Tibetan for not protesting in 2008.

“The Ten Greatest Tibetan Swindlers” was translated into Tibetan quite quickly and posted just days later on several Tibetan language sites such as http://www.gdqpzhx.com/bo/html/special/20101004779.html and http://youshun12.com/?p=3838. More recently on March 29, the text of the blogpost was re-posted on Woeser and Wang Lixiong’s joint project, a Tibetan news and blogs aggregator website http://tibet.woeser.com/?p=26103 However as Woeser reported yesterday on her Twitter, their website suffered a malicious attack and all content has since been lost.

Ok, so maybe you and I, we are all swindlers! But nothing should be covered up, ignored and even more, one shouldnt disrespect those who are struggling for the preservation and development of Tibetan culture. Also, you should focus more on peoples strong points, those strong points we can learn something from.

Author’s reply: To reveal weak points is our responsibility and arent you guys constantly repeating and stressing the strong points?

I totally understand the blogger. He is not covering anything up. He is even less disrespecting those who struggle for the preservation and development of Tibetan culture. Of course he knows about other peoples strong points. Everyone should be aware of this important situation, everybody should make an effort.

Your insults towards Tibetan scholars are unworthy. Of course there exist some of the problems you mentioned but they only refer to a small group. Why dont you also write about some good things and make a comparison?

Authors response: Thanks for sharing your opinion.

Over the past few years, there have been 4 so-called representative scholars who gave talks at a conference in Beijing. They claimed that the 20th century Tibetology is our Tibetology and we have great faith in the future. None of those 4 people could write or even speak a single word of Tibetan, what kind of future is that?