High Peaks Pure Earth has translated a recent blogpost by Woeser that was published on her blog on 15th December 2008. Of course it was Deng Xiaoping who said “to get rich is glorious” and it seems that that saying still applies – and there are so many ways to get rich in China. This year, Tibet has brought unexpected commercial opportunities to astute business minded folks. Never mind the politics, the first example of making money off Tibet was perhaps this story by the BBC in April this year where it was revealed that a factory in Guangdong had been manufacturing Tibetan flags!

A Xinhua report from 23rd March 2008 about an Amdo Tibetan found being in possession of a rifle and ammunition can be found here. In Tibet, the monasteries have often been the forces behind local-level initiatives to encourage nomads and farmers to hand in weapons in an effort to discourage hunting. This can explain the so-called “weapons caches” that was all over Chinese media reports.
In China, the sort of mini-advertisements that Woeser writes about are commonly sprawled all over walls, pavements, bridges, lamp posts, any surface really. They advertise everything you could possibly need in daily life, from getting your big bottles of drinking water delivered to fake ID vendors to rooms for rent to guns and knockout drops. A quick look at the dictionary tells us that knockout drops are “a solution, usually of chloral hydrate in alcohol, put into a drink surreptitiously in order to render the drinker unconscious”. Woeser writes about seeing the mini-ads in Lhasa during her brief trip there in August. Her shortest trip ever to Lhasa actually as she was constantly monitored, detained for eight hours and had no choice but to go back to Beijing. Her detention was subsequently reported by The Times. After the “Incident of March 14”, all official media, from Beijing to the various regions in China, exaggerated in the extreme incidents of “beating, smashing, robbing and burning” in Lhasa and other regions in Tibet by continuously claiming that they had “hunted down and seized” batches and batches of “firearms and ammunition” in many monasteries and tried their best to create evidence that Tibetans had become “terrorists”. As a result, this not only caused people in inland China to change their attitude when talking about “Tibet” but also many mini-advertisements in Amdo, U-tsang and Kham (traditionally, Tibet includes Amdo, U-Tsang, Kham and other regions) have quietly appeared overnight, the content of which is unexpectedly about the sale of real firearms and ammunition!
It is said that these are all mini-advertisements put up by gun dealers from all over China. Since they are “terrorists”, they will be demand for firearms and ammunition. The gun dealers believe the propaganda of the authorities that Tibetans are “terrorists”, to the contrary, they hold that it is just the perfect business opportunity they wished for, thereupon, they have travelled a great distance to come to the Qinghai-Tibet Plateau, where the sky is high and the rivers are long, and have sent out information about supplying firearms to the ubiquitous Tibetan terrorists by putting up mini-advertisements everywhere randomly.
This news, which sounds preposterous, was first told to me by a friend of mine from Amdo. He also said the following with a serious tone: “look, the power of market economy is great after all”.
I originally thought this was a joke made by Tibetans to mock current affairs, but, I did not expect that I would be fortunate enough to witness the joke to become a reality as soon as I arrived at my house in Lhasa. Opposite our house, there is a “retirement house” which is rented to temporary workers from other places. On its walls where many mini-advertisements are repeatedly put up or written, I saw a line of hair-raising black words, which read “13579293739 for knockout drops and guns”.
Look, there are not only knockout drops for sale, but also firearms! Certainly, what they wrote in their ads are all in Chinese characters and they are not necessarily selling firearms specifically to Tibetans. But this was clearly the joke told to me by my Amdo friend. Morals of the world are indeed splendid! What is more splendid is that there was a patrol car parked next to the mini-advertisement!
Later, on the day of 21st August, after I had been taken by the Tibetan and Chinese public security and interrogated for eight hours, to show my gratitude for sending me home, I deliberately told the story to Wangdu, the fat deputy director of the Public Security Bureau. He gave a snort of contempt and said it was a fabricated story and he was about to criticize me for “having an ulterior motive”, so before the night fell on Lhasa, I immediately pointed out the rather eye-catching “knockout drops and guns” opposite my house and said the following words to the deputy director,  “Director, you should track down the gun dealer by following clues. Make a phone call to this phone number. So brazenly selling guns and knockout drops is simply damaging the great stability of Tibet.” All the public security officers were surprised. Ha, they hadn’t thought that even I could “provide meritorious service by reporting [illegal activities] to the authorities”.
Later I read a blog written by a Han Chinese who went to Tibetan areas as a tourist and wrote that when he travelled to the famous travel destination Shangri-la he also saw the mini-advertisement about “guns” which made him shake with fear. He wrote baffled, “Ads for the sale of ‘firearms’ in Tibetan areas are just like those of  the [fake] I.D Group of Southeast Asia” in Beijing and those of “detectives” in Shenzhen, that leave their phone numbers openly and legally. I asked Xiaoxiao to take a photo of the advertisement which had shocked me, and his angle for the photo is rather interesting: next to the advertisement for firearms there is a hotpot restaurant which is permeated with warm-heartedness. The people in the photo sitting there eating hotpot are uniformed police.
Since the advertisements for firearms have suddenly been put up all over Tibet just as the spring wind comes overnight, it cannot be justified if I show indifference to a new thing like this, therefore, I document it as such.

Click here to read the blogpost written by the Chinese tourist who travelled to Shangri-la with a photo of the mini-advertisement. 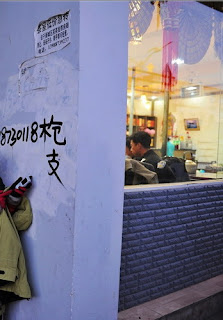