High Peaks Pure Earth has translated a blogpost by Woeser that was originally written for Radio Free Asia on April 21, 2010 in Beijing and posted on her blog on April 26, 2010.
This is the first blogpost by Woeser to reflect on the earthquake in Kham. Since this article she has written more on the earthquake which will be translated in the future. Woeser has also been following reactions to the earthquake almost every day on her Twitter page and compiling these Twitter discussions for her blog. 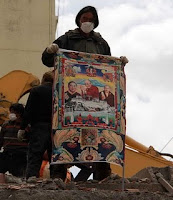