High Peaks Pure Earth has translated an older article by Woeser that was written on July 7, 2009 for the Tibetan service of Radio Free Asia and posted on her blog on July 20, 2009.
Although this article was written two years ago, many of the issues of ethnic tension and unrest within PRC still resonate today. Since 2008, protests have flared up in Tibet, Xinjiang and, most recently, in Inner Mongolia. 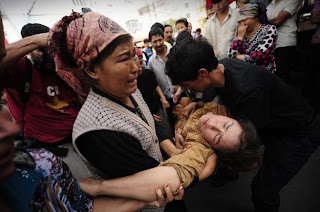 During the night of July 5, text messages that were sent nonstop only contained a few words: “Something has happened in Urumqi”. My heart felt really heavy because I knew what those words meant. News coming from the scene of the events appeared on the internet and was removed, again and again; action was taken quickly. Real-time blogs such as Twitter or Fanfou* followed the same pattern: news of the events became scarcer and scarcer. Some said that media used for communication such as internet or the phone were not functioning as usual in Urumqi. Here we are again, the voices coming from the people have been silenced. Here we are again, authorities have been quick to put a name on the events, and have announced: “this is violent and organised crime, it was premeditated, it was instigated and orchestrated from outside, and carried out on the mainland by special groups.”
I say “here we are again” because this is all too familiar, especially for Tibetans. All the excuses used are the same. Only names have changed: the Dalai Lama has been replaced by Rebiya, Lhasa has been converted into Urumqi, and March 14 into July 5. Both events were painstakingly planned crackdowns. Later, the ruthless repression carried out by authorities became the natural way of doing things. To make the crackdown look more rational, authorities were also quick in the use of their propaganda tools. All the reports released by the media were really similar to the documentary that was meticulously made last year in March about March 14, even comments could be reproduced.
I suspect that in Urumqi, it started with a peaceful demonstration, but ended up with beatings. This has to do with the dark role played by authorities in the event. Peaceful Uyghur demonstrators could not be as foolish as to make a mistake that could be used against them, that is follow their impulse, and act disorderly because of previous beatings. If they did that, then the same thing that happened on March 14 last year on the streets of Lhasa would be reproduced: numerous policemen undercover and secret agents mixed with protesters, took the lead in beating up, and deliberately offended demonstrators. At the same time, state media followed up, meticulously collected evidence, and then the army carried out a bloody crackdown. Such high-skilled practices are already mastered by authorities.
The only difference is that Chinese state media were more prompt, and the plan was mastered in terms of action. This is best illustrated with what Shi Zhanzhan cheerfully said, from Chinese state media: “There is so much improvement in reports from Chinese media compared to how the violent events in Tibet last year were covered. […] After the first article was released by Xinhua, the three main news agencies – Reuters, Associated Press and AFP –  were also quick to publish articles, but in terms of descriptions of the unrest, they all quoted the article in English by Xinhua. It can be said that, as far as the description of the unrest in concerned, Xinhua definitely had the advantage. That’s right, foreign media became the helping hand of Xinhua for a while, but this will not last, because the voices of people who have an insight in what happened have already spoken.
Most interesting is that Xinhua was particularly thorough when reporting the so-called “Xinjiang riots”. But why did they not report the “revenge killing” that happened on June 26 in the same way? In fact, that event, which was soaked with hatred between different ethnic groups, was the catalyst of the events on July 5. However, biased reports released by Chinese state media conversely make the event on June 26 look even more blurry, and they stir up hostility from the Chinese society towards Uyghurs. This is substantially dangerous. Nevertheless, Chinese state media will not draw lessons, and will continue telling biased stories, such as the story in Urumqi of a demonstrator: “the young man […] was waving a wooden stick up and down, but several people threw a hoe in several pieces”. It may be said that among a carefully thought process, a negligence occurred. If we look at casualty figures that have been released, over a hundred people died and almost one thousand people were killed. Only within a few hours, would such weapons have created so many victims? Some were killed by the army and the police at point-blank range, as a result some demonstrators perished at the scene of the events. Obviously, this was not made up! Besides, in the media, everything is done in order to exaggerate the description of the unrest, or of the injured. This will only strengthen hatred between minorities and cause a greater tragedy.
Since the events in Tibet last year, authorities have once again set up and adjusted the number of people who willingly answer to the plan, which makes it even more high-handed, but will this have a positive outcome? Peace which has been brought about through the use of force is not genuine; a day will come when all these people from different ethnic groups who have been oppressed and have remained silent will let the flames out of their oppressed chests because the anger that remains within cannot be extinguished. And when their contained feelings will be burning, they will let the world witness these flames out on the oppressor. From March last year to July this year, from Lhasa to Urumqi, only we have been able to see something that the world cannot see: “Those are the same tears, the same lives, the same people”.
Beijing, July 7, 2009
* Translator’s note: Fanfou is the Chinese version of Twitter that was in use at the time but has since been shut down.