High Peaks Pure Earth has been monitoring Tibetan blogs in the run up to Losar (Tibetan New Year). In 2009, we noticed that many sites were closed down in this period for “maintenance”, partly also because the sensitive date of March 10 was approaching and also because many blogposts had been appearing, urging Tibetans not to celebrate Losar that year.
In 2010, there was an upsurge in online activity about being Tibetan and Tibetan identity that continued throughout the year. Also very popular on High Peaks Pure Earth last year was our posting of “The Tradition of Gu-thug Before Losar”, Tibetans all around the world will be eating Gu-thug today, Losar this year falling on March 5, Saturday.
This year, there has been discussion amongst Tibetan bloggers on the subject of Losar itself. The issue is that Tibetans all over Tibet celebrate New Year at different times, for which there are various reasons. Particularly in Amdo and some parts of Eastern Tibet, New Year is celebrated at the time of Chinese New Year. High Peaks Pure Earth has selected and translated two recent blogposts, one in Tibetan and one in Chinese, that outline the debate and also some interesting comments. 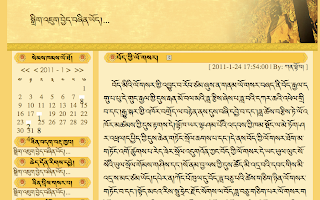 The first blogpost was written in Tibetan and posted on AmdoTibet on January 24, 2011. The blogger outlines first how the regional Losar variations came about:

Although the blogpost makes no comment on the different Losar days, the comments to the post offer some viewpoints: 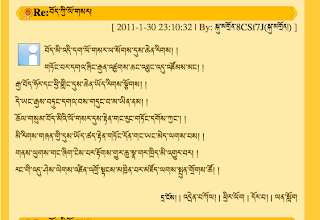 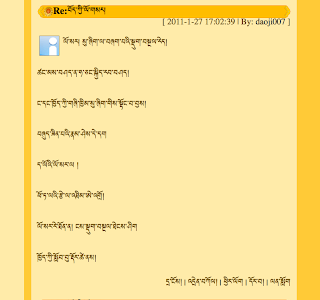 Losar, who inherits this sorrow?
Everyone says it is a joyful time.
But who has busted or emptied our home?
All those brothers and sisters who have passed away,
May their souls float on the top of the Potala this Losar?
When Losar comes, my heart is filled with sorrow.
Your student Dortse

If in all parts of Tibet only one Losar is commonly celebrated, then it will help to have a common language and unity among us! So many good things will come out of it. So let us spread the benefits by celebrating a common Losar…

The second blogpost was written in Chinese by a blogger called Muya Dorje and was posted online on February 7, 2011, just ahead of Chinese New Year. The title of the blogpost is “The Sound of Unity”, the same title as the popular song by Sherten that calls for Tibetans from all three provinces of Tibet to unite. 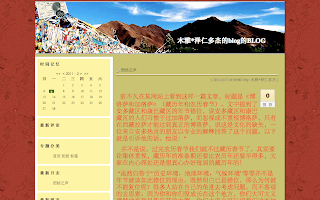 A while ago, I saw an article online called “Tibetan New Year and Chinese New Year”. In it, the article mentioned the problem with Amdo and Kham’s New Year celebrations, and stated that the people of Amdo and Kham were more accustomed to Chinese New Year. It was implied, that the people in these regions had neglected, or were indifferent to Tibetan Losar, and that to experience it properly, one had to be in Lhasa. One friend from Amdo decided to reply to this article. In the following passage, he says:
It’s not that after we have celebrated Chinese New Year, we don’t also celebrate Tibetan New Year. In terms of social importance, the preparations for Tibetan New Year start far earlier than Chinese New Year, and deep in our hearts, we all want to have a great Tibetan New Year, every year!
The rest of the blogpost takes the the theme of Losar to ruminate more largely on Tibetan identity and Tibetan unity:
Tibetan people nowadays keep on saying over and over again that we need to protect our culture, let it flourish and pass it on to the next generation. But internally, we are constantly bickering amongst ourselves, using disrespectful and undignified words to speak to one another. How can we protect and nurture our own culture if we treat each other like this? Today’s Tibetans are too smug and selfish. They only understand a little of our cultural heritage, which they are satisfied with, contently thinking that they are the model Tibetan. This appears to be very narrow-minded. In my point of view, in order to pass Tibetan culture onto the next generation, we also need to pass on the Tibetan spirit. We need to understand ourselves, from the depth of our soul and heart, what it means to be a Tibetan. Only then will future generations be able to inherit our culture, and our hearts will open.
If we open the pages of Tibetan history, we can understand the course of our people’s development to date. Why are there those who still deliberate over whether Amdo lies across a river in Hui territory, or if Kham has a valley in the Han land? Do you not realise you are consciously, or unconsciously, casting out fellow Tibetans simply for residing outside the Autonomous Region? Why do you look upon each other as if you are not one of the same? Lhasa is famous historically because of where it is, this we all know. But it doesn’t give you the authority to brag about it. We who live outside the Autonomous Region all have the same lifelong dream of making a pilgrimage to the Holy City, to show our love for Tibet…
Please do not think that I am boasting or showing off in the above passages. I only wanted to inform my fellow Tibetans of how vast our land is, how rich and beautiful our culture is, and how great our nation is. Please do not try to separate you from me, or magnify the distance between us, or misunderstand each other. Even though there is a big difference in our dialects across these three regions, we all speak Tibetan, and we all bleed Tibetan blood. It doesn’t matter which region you are from, if someone asks you who you are, I trust that you will always loudly reply “I am Tibetan” every time.  We do not represent an individual or a region, we all represent Tibet.
Nowadays, many outstanding Tibetan people are committed to unity, so that our Tibetan hearts will all be connected to one another, and never drift apart. I hope that we can forget about our own accomplishments and glory. Heart to heart communication and heart to heart discussions, so we can have a frank understanding of each other. Only this way can our deep and profound culture be protected, allowed to flourish, and passed onto future generations.
I know that one person alone is unable to change a lot, but I believe that if we are united, and have faith…
Let us hold our hands together, place them on our hearts, and pray for our Land of Snows to be peaceful and tranquil. We are all brothers and sisters, and will always be one family…