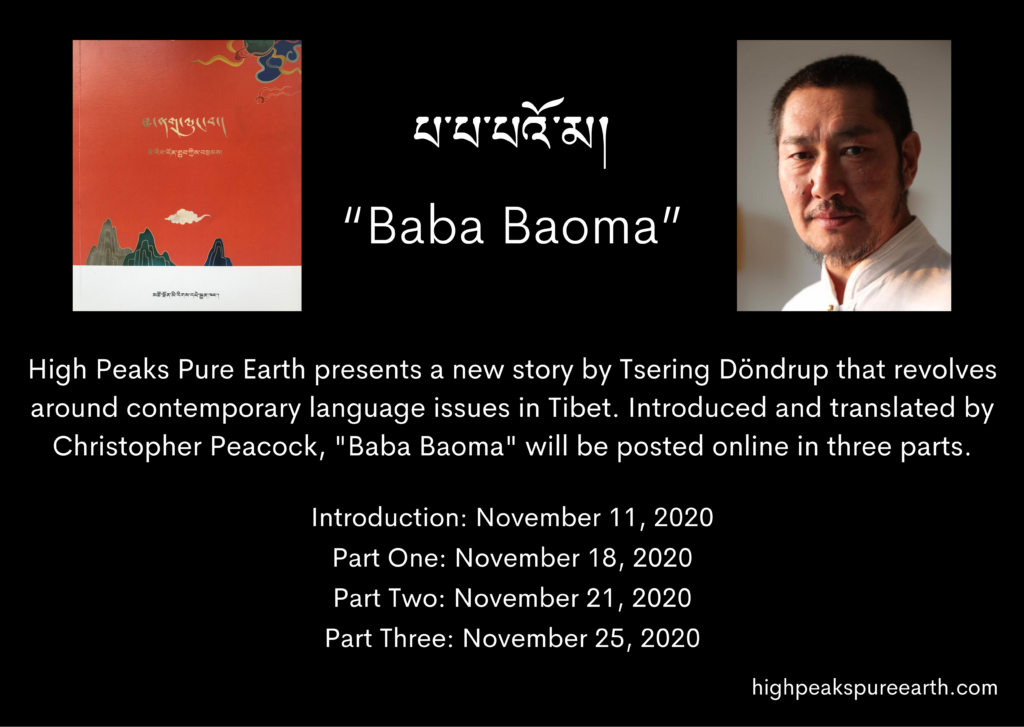 Tsering Döndrup is one of modern Tibet’s most prolific and respected authors. Born in 1961 in Malho (Chinese: Henan) Mongolian Autonomous County in Amdo (Qinghai Province), he published his first story in 1983, and to date he has three collections of short stories, a collection of novellas, and four full-length novels to his name. Tsering Döndrup’s fiction has often dealt with the language crisis brought on by the dominance of spoken and written Chinese in today’s Tibet. From early works such as his novel Fog (Smug pa, 2002) through to his more recent short story “Black Fox Valley” (Wa nag lung ba, 2012), we see his Tibetan characters grappling with a society where their own language is increasingly under threat. But nowhere has he dealt more directly with this issue than “Baba Baoma” (Pa pa pa’o ma), a story from his most recent collection of short fiction, also titled Black Fox Valley (2019).

“Baba Baoma” tells the story of Wanggyel, a boy from the fictional rural county of Tsezhung who attends a Chinese school and ends up stuck between two languages and cultures. Like some of Tsering Döndrup’s other work, particularly his renowned novella “Ralo,” “Baba Baoma” consists of a series of episodes in Wanggyel’s life, relating his various misadventures with the author’s typical penchant for biting humor. The plot deals directly with the language issue by showing us how Wanggyel’s Chinese-medium education distances him from his mother tongue. But Tsering Döndrup has not only crafted a piece of fiction about this crisis – he weaves this dilemma into the very language of the story itself. “Baba Baoma” is written in Tibetan, but it features an abundance of Chinese loanwords, as well as Chinese characters used directly in the text. Though the author has used such techniques before, this story pushes his experiments to a new level. Now, in reading about Wanggyel’s linguistic struggles, we also experience a version of them for ourselves as we try to pick our way through a text that is constantly interrupted by an unfamiliar language (and script). Even the title is a transliteration from Mandarin, and is meaningless to the reader until the reference is explained later in the story.

Like many of Tsering Döndrup’s characters, Wanggyel is not exactly a sympathetic figure. He can be callous towards his family, and it often seems like his only priorities in life are money and cars. But at the same time, the story also shows us that Wanggyel is the product of social forces beyond his control. His removal from Tibetan language and culture leads him to make frequent blunders, but he can hardly be blamed for this, since it was never his decision to be uprooted and forced into an unfamiliar linguistic environment in the first place. In this sense, Wanggyel is a victim, having missed out on an education in his mother tongue and the feeling of cultural belonging that that brings. We see also that other characters who have had the benefits of a Tibetan education, such as Rapten the driver and in particular Wanggyel’s sister, seem to lead much more fulfilled lives, free from the cultural and linguistic anxiety that constantly plague the protagonist.

Tsering Döndrup’s fiction has never shied away from tackling difficult questions, and “Baba Baoma” deals with arguably one of the biggest problems facing Tibetan culture in the People’s Republic of China. The ever-increasing hegemony of the Chinese language is, moreover, an equally pressing issue in other “ethnic minority” regions, including Xinjiang and Inner Mongolia, where protests were recently held against new language policies that would reduce the use of Mongolian in schools (an especially relevant development since Tsering Döndrup is in fact Mongol by ethnicity, and indeed the story has already been translated into Mongolian). “Baba Baoma” also readily brings to mind the work of a number of postcolonial authors whose situations are comparable, among them the Kenyan writer Ngũgĩ wa Thiong’o, whose work Tsering Döndrup is familiar with through Chinese translation. In this way, not only does Tsering Döndrup’s story address an issue of central importance to Tibetans, it also speaks to the linguistic plight of “minorities” in China and colonized peoples around the world, helping to bring the Tibetan case into conversation with global postcolonial literatures and movements of language justice.

Christopher Peacock is a graduate of the School of Oriental and African Studies (University of London) and holds a PhD in East Asian Languages and Cultures from Columbia University. His research focuses primarily on Tibetan writing in the People’s Republic of China.