High Peaks Pure Earth has translated a letter from a Tibetan monk originally written in Tibetan on April 21, 2010 from Kyegudo, the area in Kham affected by the April 14 earthquake.

The letter gives a personal perspective on the relief work on the ground, insights into the amount of work done by monks and nuns and criticises the Chinese soldiers. Overwhelmingly, the monk sees the Chinese relief efforts as a performance with the emphasis on media and show. The visits by Chinese leaders are as well measured in the amount of hours that the relief efforts were halted for.

This is the fifth earthquake related post on High Peaks Pure Earth, see our previous posts for more Tibetan reactions, critical questions and the detention of Tibetan scholar Shogdung: 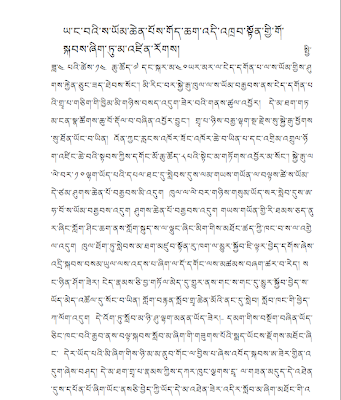 The earthquake in Kyegudo occurred at 7:40 on April 14th and it was really a powerful one. Right at the beginning, I heard that this earthquake hugely damaged our monastery and two fellow monks had died. Shortly after that we heard more news, one after another, saying that the death toll was rapidly increasing.

More than two hundred monks left the monastery for Kyegudo to rescue the people who were buried underground but because of the traffic on the way, we arrived in Kyegudo at around 8 in the evening. When we got there, we realised that this was a really devastating earthquake. The electricity poles had fallen down and all the houses were razed down to the ground. As we contacted the local rescue office in the town to identify the location where we could start our work of saving peoples lives, we were told that the office was already closed for the day and they suggested that we contact the office the next day.

We knew it was urgent so we just ran to all the places where there were people likely to be trapped underground after the earthquake. We approached a school which was partially damaged with probably around twenty students trapped below the ruins of the building. We saw that some Chinese soldiers were digging the ruins and trying to rescue the students. We were at the back of the school building from where we could see the lower part of a students body and a man there was saying before sunset, the children might … , a cry of a student came up from below the rubble. When the monks used ropes to remove the broken beams and tilestones, a soldier appeared before us and asked What are you doing? We replied there is a student down there in the ruins. He took a glance at the scene and said ha ha, this student is already dead, his head is smashed, and it’s dangerous to stand on the rubble.

It is maybe because of our compassionate hearts or out of love for our fellow people, all the monks had so much strength to contribute to the rescue work. When we were working so hard to get close to the bottom of the rubble, the soldiers were just staring at us in a surprised manner. After a while, the media arrived at that spot and  another surprising incident that occurred was that a man who was said to be the leader of the region grabbed the shoulder of a monk and rudely said get out of here, get out of here. When the young monks tried to fight back the leader, the elderly monk stopped the young monks and said please do not act like this, the most important job right now is to save the lives of the people.

When we were leaving that location, all the soldiers picked up the digging instruments and the ropes and pretended to be rescuing the lives of the people underneath while the media were taking pictures of them.

At that point, a question that popped up suddenly in my mind was what was the priority between saving the lives of the people and filming the soldiers? All the soldiers left after they had co-operated with the filmmakers and they were said to have gone to another rescue location in the town. But the truth is that they fled to the mountains after they heard that the dam in the upper village had been damaged and a possible flood would be occurring soon.

One of people from Nangchen area, whose father had died, said an earthquake is a kind of natural disaster, it can’t be helped but the failure to save the lives of the people is caused by such rumour. At 7 on the second day morning, we went to the rescue office and continued to work on the rubble. A dead body of a housewife from Nangchen county was found and her two year old son was buried on the second floor of the ruined house. We hoped that the son was still alive so we continued to dig the ground with the soldiers who run away again when another small wave of earthquake occurred. When I encountered the behaviour of the Chinese soldiers, I was wondering where these brave heroes of Wenchuan earthquake were and why they did not show up in Kyegudo.

While the soldiers were going to have lunch, a young boy was begging with tears in his eyes that the soldiers come back to rescue his people as soon as possible. By seeing this scene with my own eyes, I felt so sad and suffered tremendously. The rescue team of the armies went back to their camps for meals whenever they were slightly hungry.

After thinking about this for a while, I realised that all the TV programmes confused my mind and each of the people shown on TV was a perfect actor. As a matter of fact, rescue work is not an easy job. For example, when one part of a second-floor building has fallen down, the other side can collapse at any time and thus the people who are rescuing lives nearby are at great risk. Therefore, the people who are in danger and saving others lives must be those who love their fellow people or willing to sacrifice their lives for others. These people are only few in number and most of the people are just actors on the TV screen.

Around the afternoon of that day, some of the Chinese rescue workers arrived and left the spot after one hour by saying there was nobody in the ground and they said even if there were people down there, we cannot do anything to help them. We told the soldiers that they should not act like that and there is probably life under the ruins of the houses. Unfortunately, they did not pay any attention to what w
e said and left the spot shortly afterwards.

All the TV programmes are saying that the people from different nationalities are united and working side by side and the touching moments of helping each other can be seen everywhere. But, in reality, there is more disappointment and anger amongst the people of China and the Tibetan people.

When we were going to rescue lives in the northern part of the town, we had not seen anyone sent there by official rescue teams. When we got there, we only saw many people holding banners on which they wrote their rescue slogans and we also witnessed a group of photographers taking pictures and filming them.

One of the unfair, sad, and disheartening things is that they claimed that all the rescue work done by the monks and ordinary Tibetans were counted as the merit of the Chinese rescuers. The truth is that the whole city was guarded by heavily armed police. I was thinking of how it would be useful if the government sent more rescue teams instead of sending more security forces to control the people in the region. After I got another moment to think about the policy of the regime, I wondered what the target was of the guns carried by the soldiers? When I realised that the real targets of the guns are the people of Kyegudo who had just lost their loved ones, tears started to fall from my eyes.

I had heard Chinese Premier Wen Jiabao arrived in Kyegudo. Although Wen said your loss is our loss and your suffering is our suffering, which allegedly moved many people in the region. However, the effect of his visit was obviously that all the corners of the town were blocked and the rescue workers turned into actors of the state TV news.

On the fifth day after the earthquake, President Hu Jintao visited the earthquake region and greeted the rescue soldiers by saying you must be very tired now and I want to express my sincere thanks to your great efforts.  He did not utter a single word about the fifteen thousand monks and nuns who were tirelessly working on the ground. On the contrary, a lot of incidents of abusing and torturing the monks and nuns were taking place and the work they are doing is threatened by saying it is time to restrain.

I can confidently say here that we did a better and more efficient job than what the soldiers did and we did not do anything illegal. We do not have any wish for anyone to come to us to express his or her appreciation for our work. It is beyond our expectations and we feel so sad to hear that our life-saving work is considered as criminal activity by the authorities.

The road towards the town and all the roads inside the town were closed for more than 11 hours while Hu Jintao was visiting. The consequence of Hus unpopular visit to the region is immeasurable in the context of saving the lives of the people. What I know is that on the same day of Hu Jintaos visit, a group of monks were on their way to Trango Monastery to rescue the monks over there, but they were stopped on the way and the driver of the vehicle was even warned by the police.

All the artificial political show and senseless action of the officials indeed delayed the time to rescue the people who were crying for help from underneath the rubble as well as distributing food to those who were starving and dying. However, since the Chinese are good at acting and propaganda, it seems that the Chinese government has drawn the eyeballs of the international community.

Finally, I want to call for one thing, that this tragic incident should not being used as a stage for political actors and saving lives of the people should be the top priority of the agenda of the government. Please do not bring any unnecessary suffering to the survivors of the earthquake.

Performing political drama on the stage built above the lives of thousands of people is another tragic scene and an inhumane action.