Having noticed earlier on in the month that the Tibetan blogosphere was going quiet, High Peaks Pure Earth admitted that there was a subsequent flurry of activity just two days later, so what do we know? Anyway, interestingly enough, there are two Tibetan websites that haven’t been working since yesterday. This time we are not being paranoid, they really don’t work anymore and we have even tried accessing them from inside China, nothing. See for yourself, the two sites are www.tibettl.com and www.tibetabc.cn, are you getting anything? It’s sad really, what happened to all those blogs that were being hosted, all that content?

Another online development that has been brought to our notice by Tibetan bloggers is that QQ, the most popular instant messaging service in China, suddenly stopped allowing its users to use the Tibetan language. Now the IM programme called QQ may not be familiar to internet users outside China but it is huge over there and is a combination of Skype, AOL, MSN and ICQ. Basically in China there is a Chinese version of everything, instead of using Google, they use Baidu, instead of using Facebook they use Xiaonei and instead of using MSN they use QQ and most of their features are identical.

QQ is owned by the company Tencent and has been operating in China since 1999 and provides everything from the instant messaging platform to ringtones to games to discussion forums. Every user applies for a QQ number either through the website or by texting. QQ even has their own currency which can be used in their virtual world. Their logo is a cute chubby penguin which also stars in its own TV show. What we are trying to convey is that QQ is massive, it is everywhere! 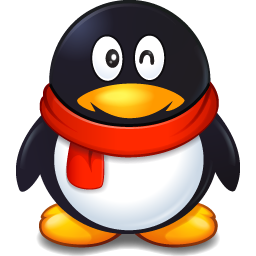 Tibetan bloggers started to notice recently that chat messages typed in Tibetan were not showing up on the chat partner’s screen. For example take a look at the screenshot below, the Tibetan script has been typed in the chat screen and has a red square around it: 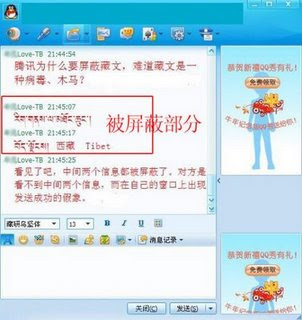 Now take a look at the next screenshot of the same chat, the chat partner’s screen is only showing the Chinese, not the Tibetan: 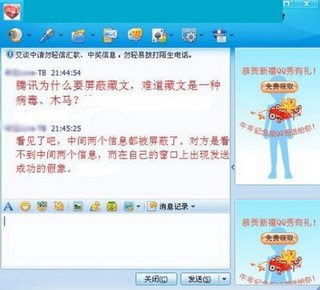 Upset Tibetan bloggers have been blogging about this in Tibetan and Chinese and there has been much speculation about the reasons for this development. Blogposts read by High Peaks Pure Earth related to this matter have ranged from the mundanely civil (one Tibetan lodged a complaint with QQ customer services who promised to ‘look into matters’) to accusations of language discrimination.

High Peaks Pure Earth has translated the following blogpost and comment from Tibetan into English that was posted online on 12th February 2009. 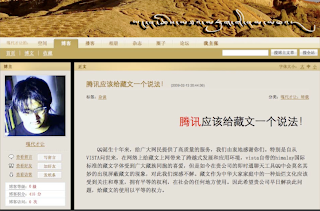 For ten years since QQ came into being, it has provided high quality service for netizens. We sincerely thank you for the services. In particular, since Vista came out, it provided great development and application environment for using Tibetan language on networks. The international standardized Tibetan font called Himalaya included in Vista is well-loved by Tibetan compatriots but at present on your companys QQ, the tool for instant chats, there will be occasions when Tibetan words will be covered without any reason. We really do not understand why this is happening. As one of the magnificent cultures in the big family of the Chinese nation, Tibetan written language should be noticed and respected, and it has the equal right to be used in any place in the society. Therefore, I hope your company will solve the problem as early as possible so that it will give Tibetan written language equal rights.

Regional autonomy is implemented in the regions inhabited by minority ethnic groups, where autonomous institutions are set up and where the right of autonomy is exercised. Each national autonomous region is an inseparable part of the Peoples Republic of China. Each ethnic group has the freedom to use and develop their own language, and has the freedom to keep or reform its own customs.

Item eight of the Law for Spoken and Written Languages of the Peoples Republic of China clearly stipulates that each ethnic group has the freedom to use and develop its own spoken and written language.

The above two items should be applicable to networks. If a network company is an enterprise allowed to be in operation by the Peoples Republic of China, it should abide by the country
s constitution and other relevant laws. Our language is sacred and we can not tolerate any action to violate it.