High Peaks Pure Earth has an update from the Tibetan blogosphere for readers today. On 16th February we posted a translation of a blogpost that had Tibetan bloggers criticising the singer Lobsang Dundrup and his bride for wearing fur on their wedding day.

Now, it seems as though Lobsang Dundrup has taken the matter to heart, High Peaks Pure Earth has translated the follow up blogpost that can be found here, http://jomma.tibetcul.com/56948.html – be warned before clicking on that link though, TibetCul has been listed as a “suspicious site” by Google that results in “malicious software being downloaded and installed without user consent”.

For readers of Tibetan, a very similar blogpost can be found here with photos of Lobsang Dundrup and various comments: http://www.tibetabc.cn/u/ganglin/archives/2009/2009224151358.html 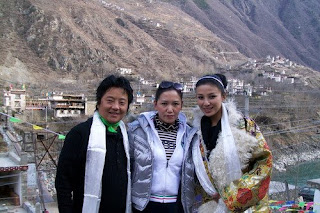 An Apology by Lobsang Dundrup

I once posted a blogpost entitled The Singer Lobsang Dundrups Wedding (it has already been deleted). Though the clothes [worn by the bride and groom in the pictures] were criticized by many people, at the same time they received many suggestions and help from friends who really care about them. Lobsang came to visit me at my home today, and he hoped to apologise to and thank all friends through my blog.

The following words and pictures are out of Lobsang Dundrups own initial idea.

Lobsang Dundrup comes from the Valley of Beauty in Rongdark and is a Tibetan singer who made his first public appearance quite early. The CD called Thanggula Wind, recorded together with Yadong, Dechen Wangmo and others was fashionable for a while, and the song called Holding the Silver Bowl High has also been sung by others widely. His solo CD called The Valley of Beauty is my Home contributed greatly to the publicity of his hometown.

As for the wedding clothes, Lobsang frankly said that these were just old clothes. Everybody should not view things so absolutely either, instead, one should abide by the Middle Way.
He himself also loves his hometown, and he also has his belief.s In his hometown, once he spent a huge amount of money in comparison to his means to build a three-storey high white pagoda.

Because of his concern for environmental protection and his own beliefs, he absolutely will not wear those clothes any more. He will also persuade his relatives and friends to take off these kinds of fine clothes. He and his wife will also take another set of wedding pictures to be posted on the TibetCul network again (since after their wedding they live separately, it will probably take some time for them to have the pictures taken).

He also hopes that in future people will not attack each other with vicious remarks. No matter whether one is from Amdo, or from Kham, or from Gyalrong, we are all Tibetan. If somebody makes any mistakes, one should patiently persuade him and help him. Look, didnt Lobsang Dundrup sincerely apologise to all?

Lobsang once again thanks everybody and greets everybody, Tashi Delek!