There must be a psychological condition that describes an anxiety so acute that there is an overwhelming need to constantly state and re-state that something belongs to you – that you own something. Where does this need come from? How does it start? How can it be cured?
First a little fun exercise, see if our readers can spot the difference here: 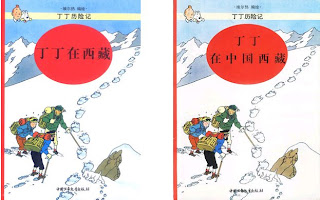 Reading the wonderful 丁丁在西藏  (photo on the left, pinyin: Ding Ding zai Xizang, English: Tintin in Tibet) seems an unlikely starting point for such musings until you remember that – until the Herge Foundation complained – in China it was published as丁丁在中国西藏  (photo on the right, pinyin: Ding Ding zai Zhongguo Xizang, English: Tintin in China’s Tibet).
Which brings us to the interesting phenomenon of China and the recurring genitive. Isn’t this something that children are prone to do, we all have our schoolbooks from primary school where we add a possessive article after our names like Tenzin’s textbook. It looks like Tintin has fallen victim to China’s rather childish and possessive nature!
Have any readers seen the Chinese government website devoted to all things Tibet? It’s called China Tibet Information Center. Do readers know what the Chinese government’s centre for Tibetology is called? That would be the China Tibetology Research Center. There was a fun exhibition held this year at Beijing’s Cultural Palace of Nationalities all about Tibet and it was called “Tibet of China: Past and Present”. At least this one was called Tibet of China and not the same old boring China’s Tibet, they are getting imaginative! 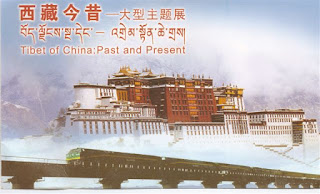 Speaking of China’s Tibet, take a look at this magazine published regularly in Chinese, Tibetan and English from Beijing: 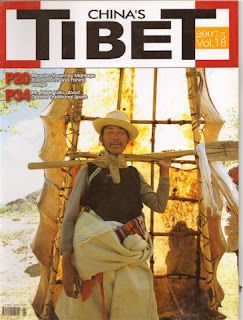 International readers will recognise it as the glossy magazine that you flick through when you wait for your visa at your local Chinese Embasy or Consulate. Other readers and intrepid travellers (like Tintin!) may have picked up a free copy on the train when travelling from China’s Beijing to China’s Lhasa, tens of thousands of extra copies were printed expressly for this journey. When you look at who publishes this magazine it’s no wonder really, China’s Tibet is proudly produced by the United Front Work Department of the CCP.

If any High Peaks readers have any idea any insights into this phenomenon please feel free to share, meanwhile learn about China’s other anxieties here and here.

Leave a Reply to Dan Cancel

“Every piece of ancient religious statuary from Kathmandu Valley that sits today in the West is stolen property. The gods must be returned from their exile, and until such time, those who presently hold them” @KanakManiDixit https://twitter.com/Himalistan/status/1540311321069101057